Posted by Ginger Jui ⋅ January 4, 2013 ⋅ 2 Comments
Filed Under  dogs, Mexico
The yellow cur hit me with 90 pounds of fang. I fell on my ass and scrabbled backwards. The dog flew at me again but was choked back, chained to the bar of the cabana.

I had ridden to the pleasant little beach of Tecolote, at the tip of the La Paz peninsula, after a rough night in the bush. There was a hand painted sign in red, “Dog bite. El perro coas,” but no dog in sight. It was hiding in the darkness of the empty, shuttered bar when I ventured in looking for a chair to watch the sunrise.

Limping away, my shorts were ripped and hanging. With dread, I peeked under my spandex bike shorts. Blood welled from a crescent bite mark at that soft part between my belly and thigh. On my upper thigh, a ragged vertical gash was already purpling into a bruise.

Even before getting bit, I had already been chased by a dog on the second day of biking in Baja. The surly ball of muscle came after my calves snarling. Pedal Ginger pedal! I put my ninety pounds of bike into high gear and pumped for my life.

I came to Mexico knowing I shouldn’t mess with the dogs here. My buddy Greg — a well travelled badass who now runs the adaptive cycling program at BORP — cycled through Ecuador carrying rocks in the front basket of his bike. One time, he was pedaling uphill and felt his bike getting heavier and heavier. Gee, he thought, is it really that steep? He looked back. A dog had wrapped its jaws around his pannier. He started carrying rocks so he could lob warning shots when a pack of dogs showed up. Preemptive measures, he called it.

No one, however, told me what to do after getting bit. Was I going to get rabies? It would be a 24 km ride back to a hospital in La Paz for a rabies shot. Moreover, that would put me a day behind in catching the ferry from Pichilingue to mainland Mexico. Flipping through my Wilderness First Responder handbook, I couldn’t find a heading for animal bites so settled on the treatment for partial thickness wounds. Clean with soapy water and keep moist with Vaseline.

The caretaker of the palapas at Tecolote let me into a bathroom to get cleaned up. I told him I had just been bitten by a dog using broken Spanish and jabbing hand motions. Not knowing the word for rabies, I asked, “Es peligro?” Is it dangerous? Octavio, the spry, wooly haired caretaker, shook his head and made a hand motion like he was depressing a syringe. I hope for damn sure they vaccinate a human biting dog for rabies.

“No es peligro,” Octavio reassured me. Then he turned to two French women who were watching the scene. They had camped in the palapas the night before and given me antiseptic spray for my wounds. Octavio pantomimed the story of how a hurricane had come through once and blew over the palapas. He made a chopping motion against the back of his head. On the order of strange things, I accept that a dog bite ranks somewhat lower than being guillotined by a palapa.

The French women gave me a piece of pizza and a fruity granola bar before driving off in their rental car. Octavio went back to his business. No one seemed overly panicked about my encounter with dog jaws.

Later, on the ferry to Topolobampo, a port town in the mainland side if the Sea of Cortez, I pulled out my yellow shorts to inspect the damage. I stitched up the shredded panel with a cross-stitch my grandma uses to repair long rips. Only then did I realize the dog had made off with a bite of my shorts.

Two days later, I’m freezing my butt off at the rim of Copper Canyon, in the state of Chihuahua. I’m bruised but not too sorely wounded. No symptoms of rabies. However, the pretty Tarahumara ladies of La Barranca de Cobre have been giggling. I hope it’s because of my stunning good looks and not the inconveniently crotchal hole in my shorts. 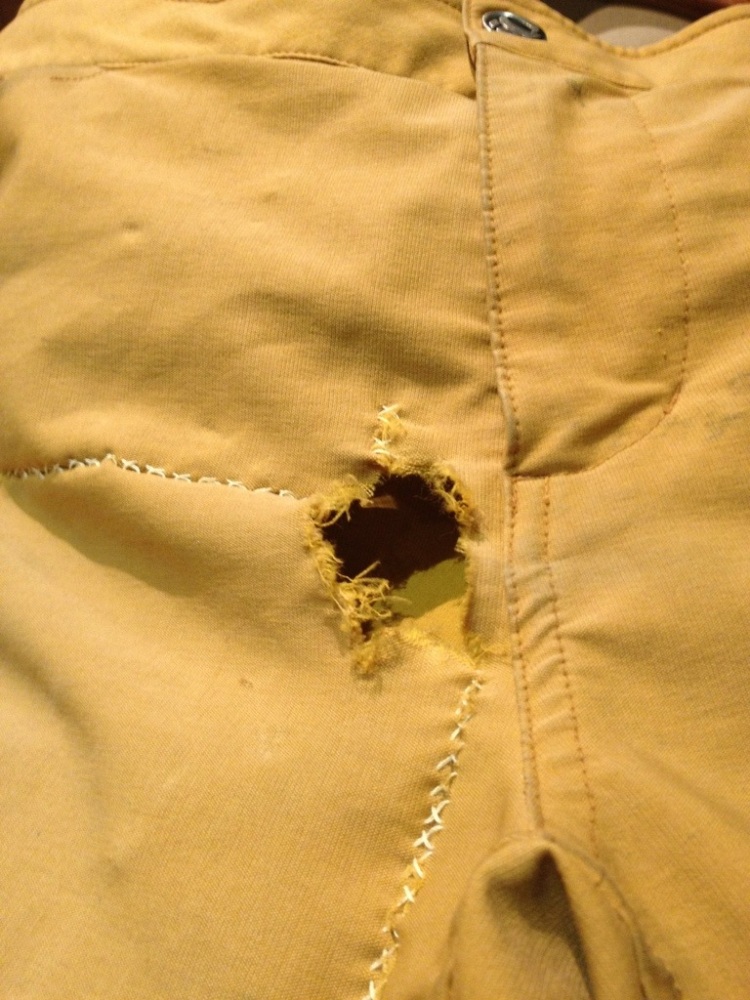 Ginger is a human-powered adventurer based in Oakland, California.
View all posts by Ginger Jui »
« The Shittiest Stealth Camp Ever
You will be the first woman to bike from Batopilas to Urique »