Like the mythical Himalyan redoubt Shangri-La, the redwooded roads and surf-pounded beaches of Sonoma County loom mistily out of reach. From San Francisco or Oakland, It takes a day to ride the 60 or 80 miles to Bodega Bay. Once there, it’s already time to camp and return to the work week. For a Bay Area bike traveler, Sonoma County sits off in the upper left hand corner of the map, somewhere near “Here be dragons” and the state of Oregon.

Last week, with a break in the weather after Thanksgiving, and more importantly, a Master’s Thesis safely packed away to my review committee, I had no obligations other than to ride, ride, RIDE. It was as if the mists opened and a mountain gateway appeared. Emerging into brisk, blue, rainwashed skies, I threw turkey leftovers in my bike bags and set the compass due northwest. 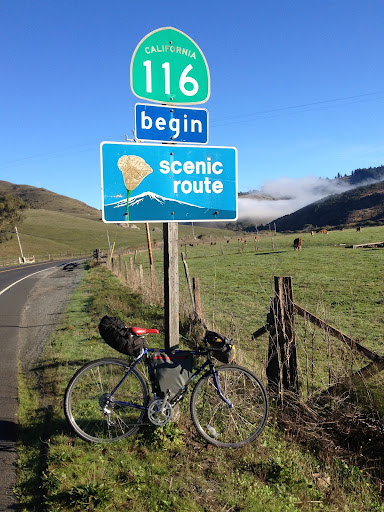 I followed the Russian River deep into the coast ranges of Sonoma County. The land of mists and cyclocross epics. 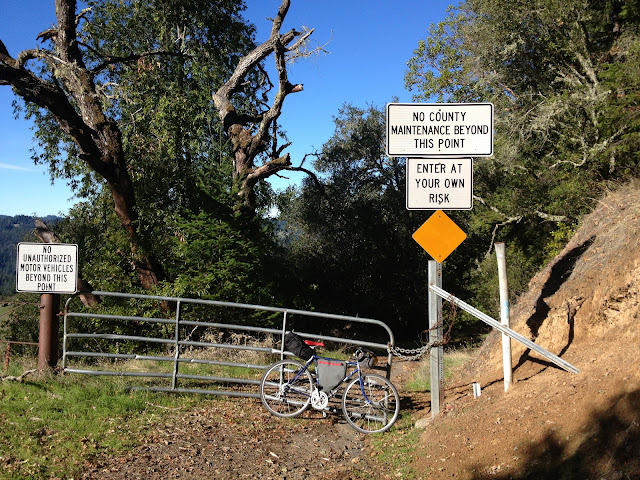 After a steady climb up from Guerneville, Old Cazadero Rd gives up on pavement. 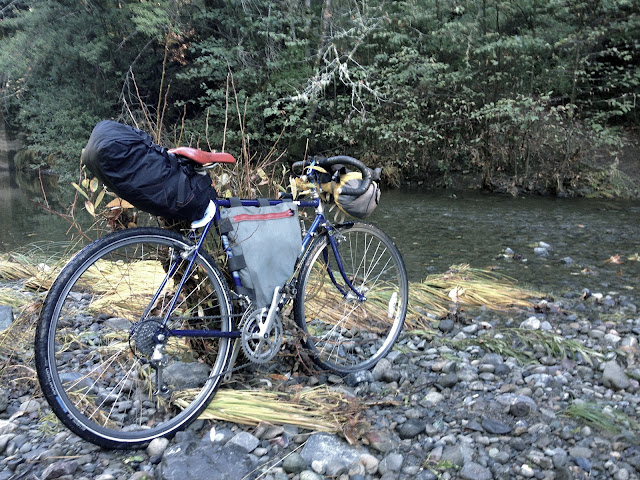 The adventure began with a steep off-road descent on Old Cazadero Road, log-jammed and slick with maple leaves. After crossing Austin Creek — in November a toe-wetting stream and not the thigh high torrent as feared — Old Caz forked into (the legendarily remote) King Ridge Road and Fort Ross Road. I mistakenly took the left fork onto Fort Ross, a slightly more habitated route through the thick of Sonoma County’s coastal range.

King Ridge and Fort Ross later reconnected onto Tin House Road but I found this description off-mark. Instead of corrugated huts, golden domes and shining pagodas rose inexplicably from the thickly wooded slopes. Welcoming Buddhist flags fluttered behind “No Trespassing” signs. As I pedaled past, the front gate of the Buddhist retreat slowly, robotically swung close,  shutting in unseen but undoubtedly harried penitents behind razor wire fence.

Sundown found me sitting at the intersection of Tin House and Skagg Springs Road, slathering a fresh-foraged apple with peanut butter. Here I sensed the reason for the razor-wire just a few miles behind me: a lively cluster of low-slung ranch houses and rambling vegetable gardens. The settlement had all the looks of a North Coast rancho — small acreage sub-reservations alloted to remnant members of Pomo, Coast Miwok and other original inhabitants of the Northern California coast ranges. The razor wire was shutting shining pagodas and BMWs in and the families in beater Toyotas out.

It was only the halfway point and I thought, “Damn, if I toured by credit card, I’d be there by now.” Determined to get within spitting distance of a hot breakfast in Geyserville, I turned inland and pointed towards Lake Sonoma. A palisade of redwoods framed Skagg Springs Road in winding blue twilight. My world narrowed to the yellow and white stripe of road framed within a dual pair of bike headlights. Pedaling deep into the watershed, a tributary of the Gualala River breathed its evening exhalation of mist.

A scarce (and courteous) handful of cars passed by that night, over 5 hours and forty miles. One pickup truck even stopped alongside to chitchat as I wound my way uphill. The plaidshirted driver grinned at me, inquiring, “So  you’re just going on Gatorade and Clif Bars or what?” I replied, “Naw, I’ve got real food. Carrot sticks and peanut butter. A burrito. Also tortillas!”

My ride into North Coast Shangri-La came complete with golden domes, but I didn’t expect the security gates and razor-wire fences. The next day though, I would find another mythical redoubt at Dillon Beach– one with more good-natured bonhomie.

[To be continued after I get these revisions done. Master’s Thesis 90% there!]

Ginger is a human-powered adventurer based in Oakland, California.
View all posts by Ginger Jui »
« A BigOl’Bash for Biking in the East Bay
Bicycle Theft Prevention from the SFPD »

One thought on “Post-Thanksgiving Bike Epic”