Continued from Day I.

The next morning, our crew prepared for the ascent of Tunitas Creek with a breakfast of bacon, eggs, greens and polenta. The slog up the shady redwood groves of Tunitas Creek is one of my favorites, and three of us chased a handful of roadies up to the top. Brian Gangelmonster outdid us all, even with full set of panniers.

After a chilly lunch break on Skyline Road, the pack of us screamed down King’s Mountain Road into Robert’s Grocery in Woodside. There, the fellowship of the chainrings parted ways. The majority of the group headed for Caltrain in Palo Alto. Meanwhile, four of us — Vajda, Brian Gangelmonster, Ryan the Beast, and yours truly — forged on to Union City BART.

Just as Team Dumbarton broke off and headed for Palo Alto, Vajda revealed some dismaying news. The squeak-click in his bike — which had started somewhere along the ascent of Tunitas Creek — looked like a broken rear axle. Now, most happy campers would have turned back for the Caltrain, but hey, what’s 20 more miles when you’ve already bombed down Kings Mountain Rd on a broken axle. So instead, Vajda and I scarfed a couple tacos (de lengua and de barbacoa) and us four wingless birds of flight flew on through the night.

The God of Mechanicals wasn’t through with us yet. Ryan the Beast broke his chain three blocks from Union City BART, so we walked the rest of the way (even though I offered for him a skitch). And then, when we sat down on BART, Vajda found this: 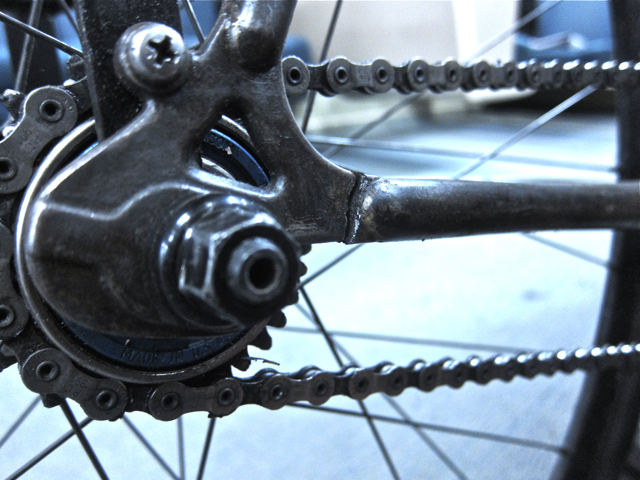 That’s right — Vajda bombed down Kings Mountain Road on a BROKEN FRAME. Now that’s what I call an epic overnight.