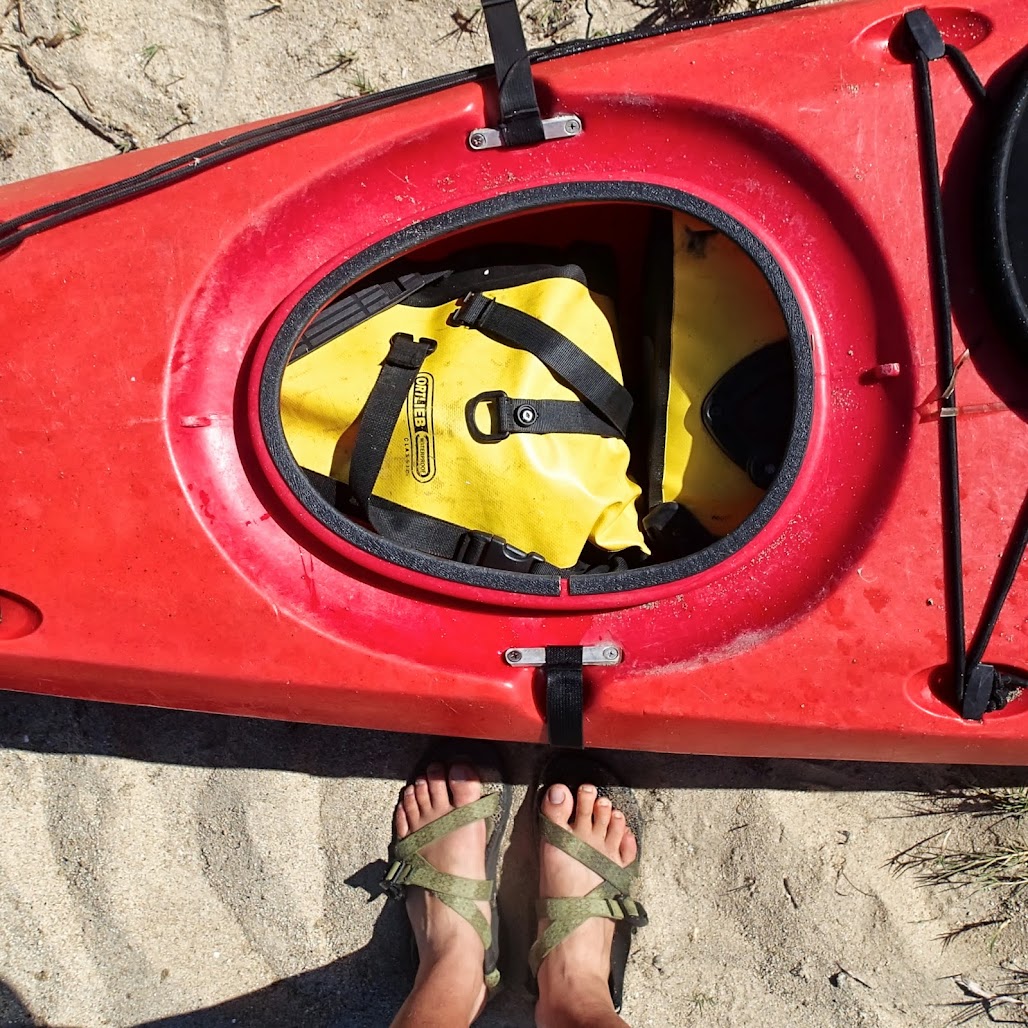 Let’s say you’re biking Hwy 1 north from San Francisco and you took a couple million years to do it. This stretch of Coast Hwy 1 is where the continental North American Plate slides and grinds along the Pacific Plate. Tomales Bay is the long, skinny inlet formed by the San Andreas Fault sinking northwest into the sea. On your right, the rolling cow pastures of Marin rumble south to Mexico. Across Tomales Bay, the headlands jump and crumple towards Alaska.

Today, clapboard vacation homes line the highway side of the bay, but the headland itself is rugged and unsettled. Its length is dotted by white sand beaches, leading to a Tule elk reserve at the peninsula’s northernmost point.

Beach camping in Tomales Bay tantalizes but there is a hitch for the bicycle traveler. Namely, you can only get there by boat.

So, one weekend in late-summer, I parked my bike and rented a sea kayak from Blue Waters Kayaking. Blue Waters is staffed entirely by sunburnt guide-bros sporting ironic t-shirts. The dock buzzed with happy weekenders out for a Sunday paddle. I was the only one taking a boat out for the night.

The guys watched me slip a pair of bike panniers into the kayak. “You pack light!” They were unloading a motorboat piled high with duffel bags, pillows and luggage — boat SAG from a kayak camping trip the night before. 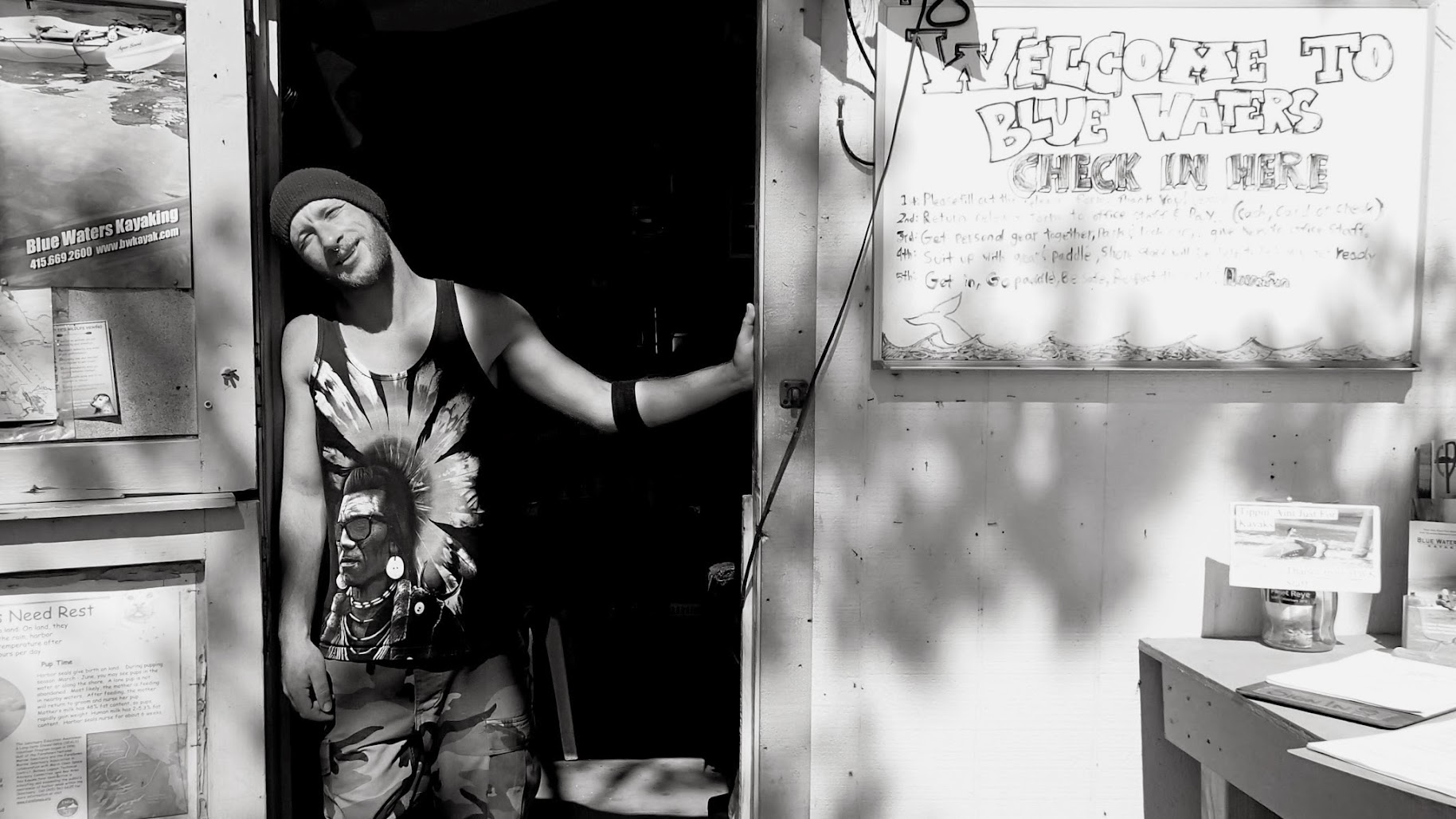 The guides warned me the afternoon wind might pick up. I pushed off, gliding into the wave chop, which proved mild compared to afternoon whitecaps in San Francisco Bay. It took just over an hour to paddle across and pick out a deserted beach camp for the night.

I had skipped lunch because I tend to get seasick.  Dinner was hours away and I had forgotten to pack snacks. I munched one of two carrots and opted for a mid-day nap. Spreading my bivvy sack on a tiny spit of beach, I curled in with a book to the lull of lapping waves.

I awoke disoriented. My beach front had tripled in size with the receding tide. Fog poured in over the headlands. I chopped up the other carrot and cooked it with rice on my tiny alcohol stove. Eating slowly and patiently, senses clarified by a dull gnaw in the belly, I waited for dusk.

The night was dark and moonless and starless. The fog closing in was eerily lit at intervals by swerving headlights climbing the coastal road across the bay and then when the fog grew thicker even this was obscured.

It was a moonless night in late-summer — the best time for bioluminescence in Tomales Bay. I suited up again and dragged my kayak across the expanse of mudflat that now appeared before my camp. I knew from chatting up the Blue Waters guides that the bioluminescence was strongest in warm, shallow waters. But it was for fear of losing my way that I hugged the shore and left a bike light weakly blinking in camp.

In the dark of dusk, the water of the bay streamed off my bow and shimmered with every stroke. I slid into beds of sea grass shushing and hissing. With every beat of the paddle their tangled skeins lit up like neurons, like a network of electric charge. Large fish startled deep underwater exploded like concussion grenades. Schools of smaller surface fish zipped away leaving zig zags in blue and white.

I paddled until I could hold no more wonder.

The next morning, I pooped in a bag — five dollars, courtesy of Blue Waters — broke camp, and paddled north. On one beach sat three kinds of pelicans in color coded cliques — white,  brown, and white with black wingtips. I glided pass cormorants, gulls, herons and tiny scurrying surf birds. A single white egret stood poised, silently stalking the tidal margin. As I approached the mouth of the bay, the sound of crashing waves grew louder and louder and I turned around far before reaching open ocean. I passed Hog Island on my return south, where cormorants shadowed a straggly grove of eucalyptus and seals blinked at me from the rocks.

Back at Blue Waters, the guides sunned themselves and greeted me blearily after a long weekend of night paddle tours. My bike was still where I left it at the end of the dock. I loaded up again and pedaled the sea road south. 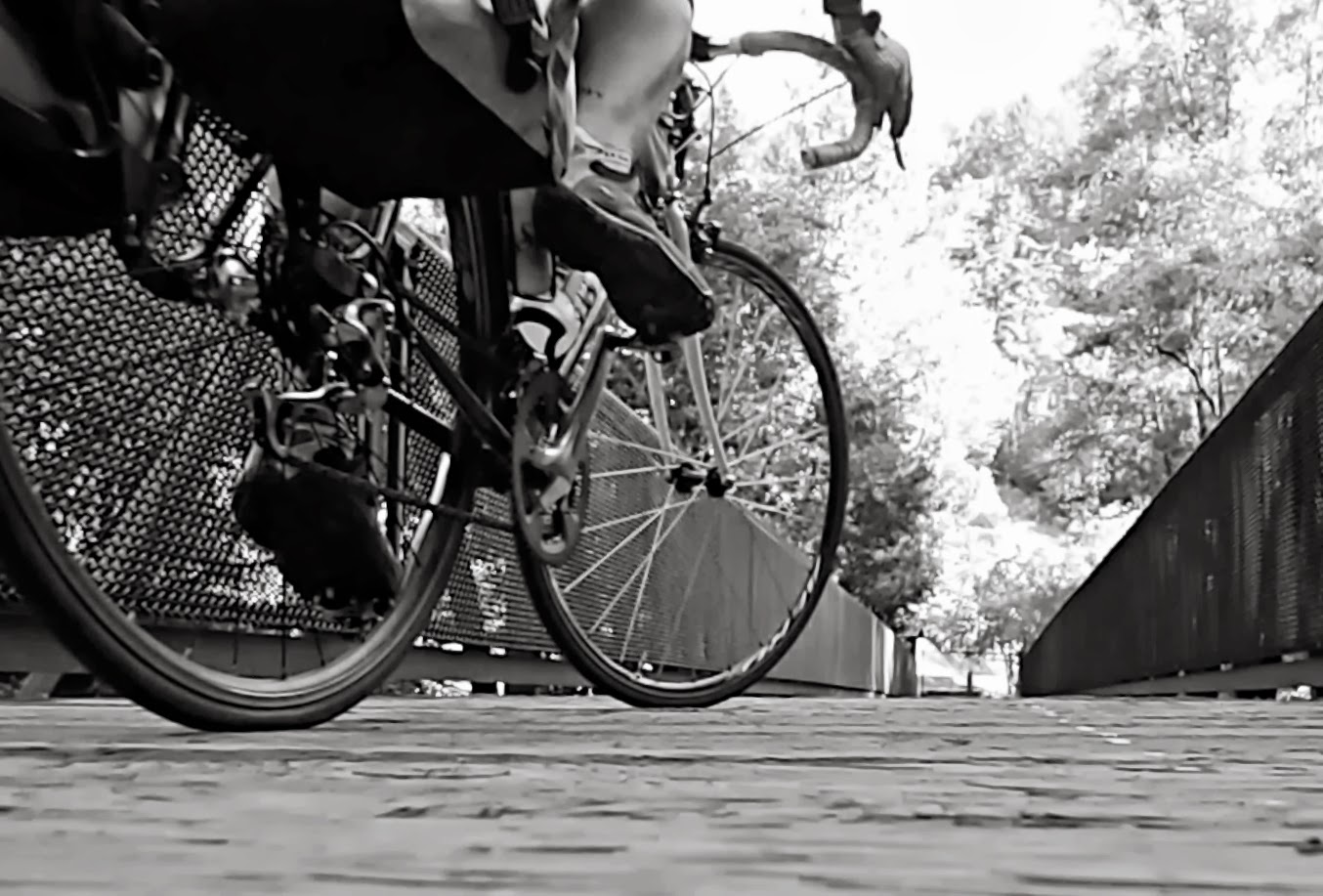 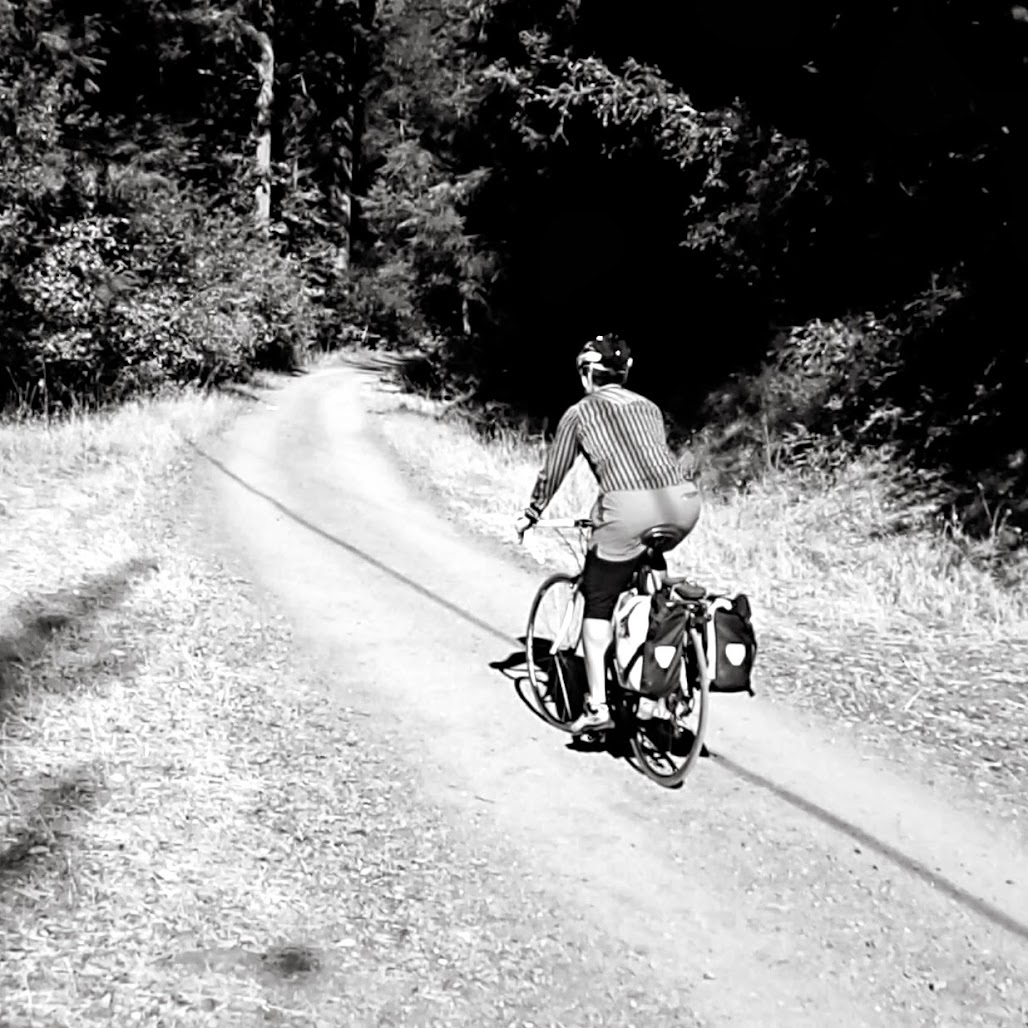 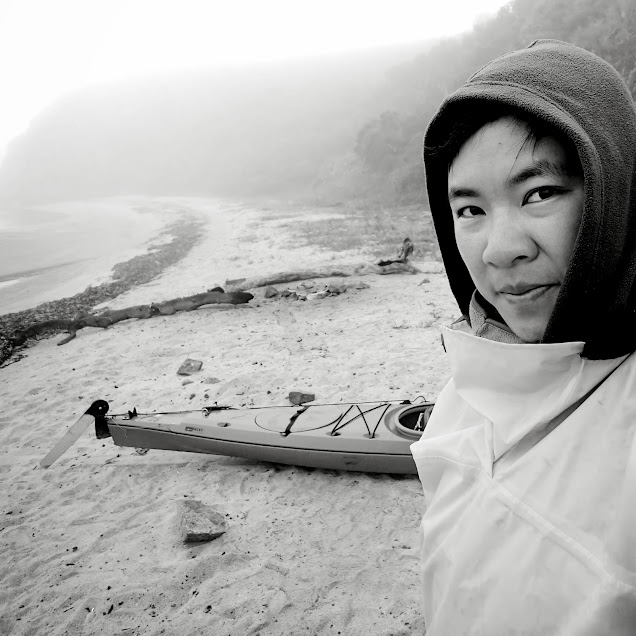 Ready for the weather. 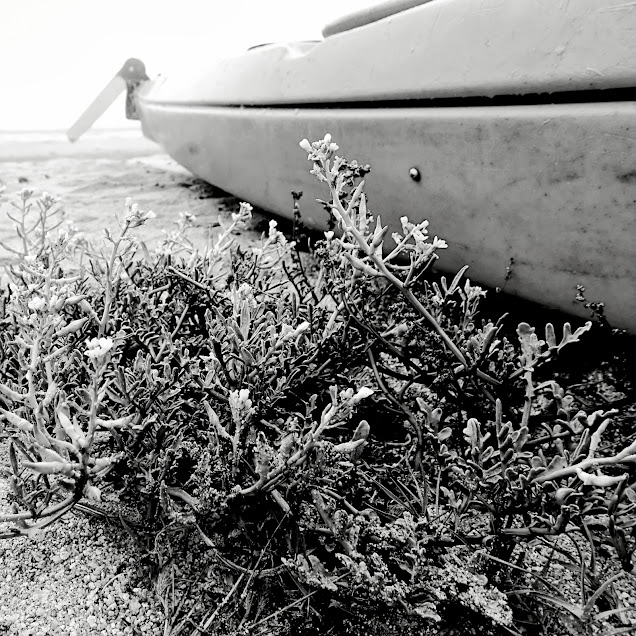 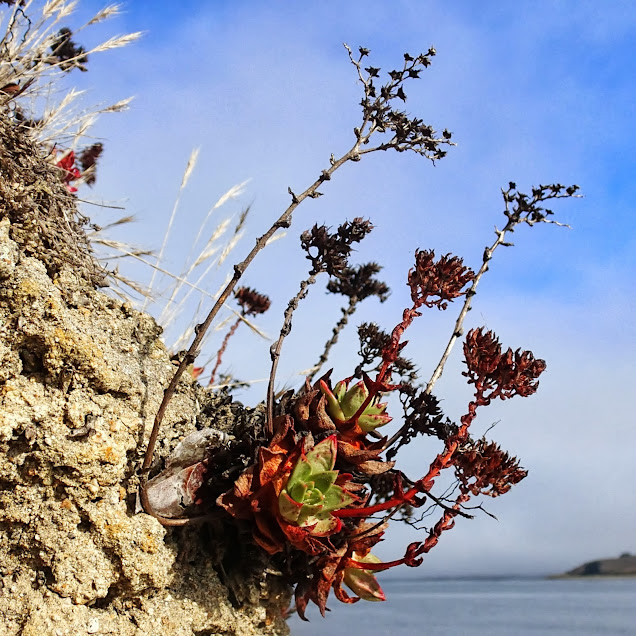 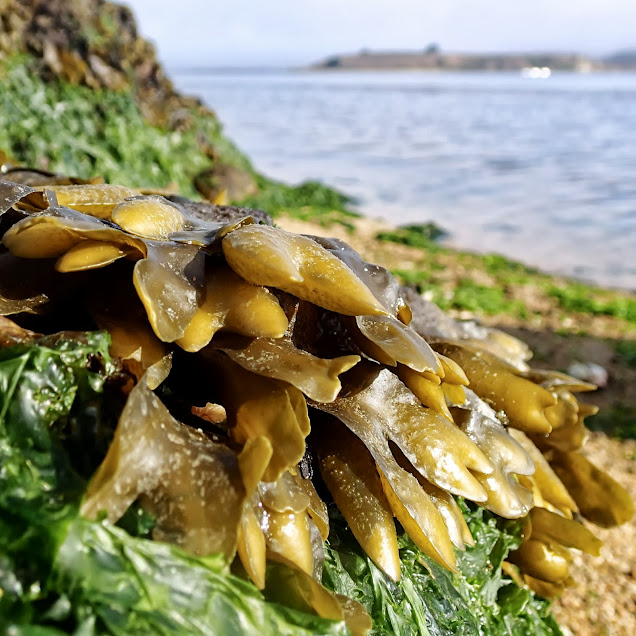 Bladderwrack, Fucus distichus, when dried and toasted is as close to seaweed popcorn as you can get. Nibbled fresh, the thick gel inside its bladders are more like a runny nose. 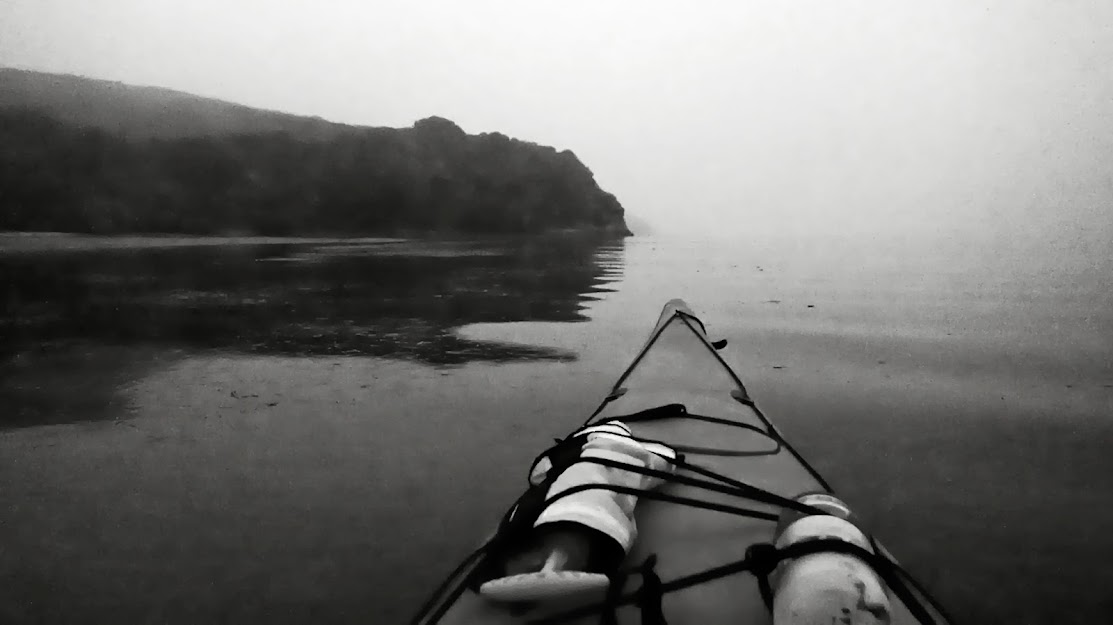 I begin my night paddle in the foggy and placid dusk. 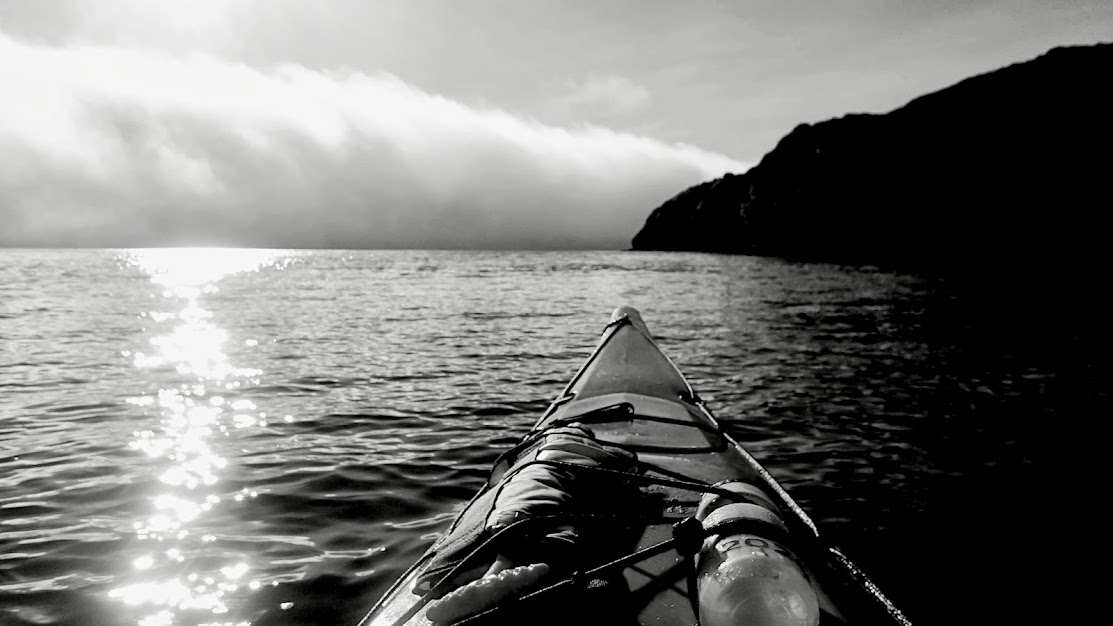 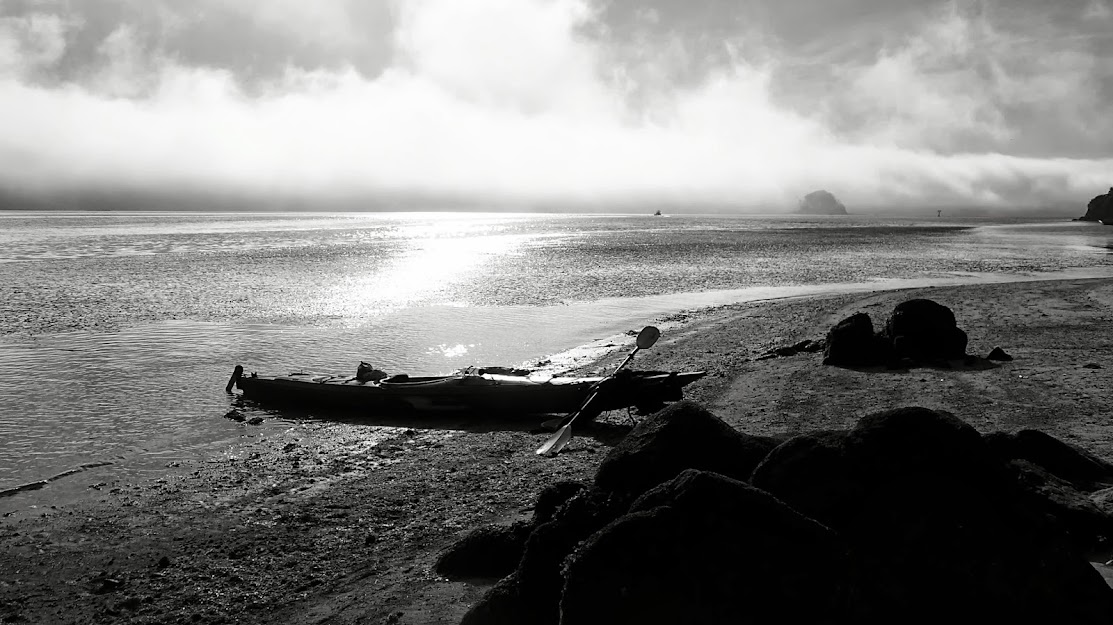 Monday morning, I was the only kayak on the bay.

Camera note: I had fried my iPhone taking pictures on my last kayaking trip. All photos here were taken with an Olympus TG-2 iHS, which is billed as a shock- and water-resistant digi-cam. I was expecting too much after upgrading to my awesome Panasonic GX1, so I returned the camera after the trip. I didn’t like the low light performance, the splotchy grain and color aberrations, but that’s expecting too much from a pocket digi-cam. Looks alright in black and white. *grin*

Ginger is a human-powered adventurer based in Oakland, California.
View all posts by Ginger Jui »
« Postcard: Fogbound in Marin
Jim’s Famoso to California Hot Springs Loop »