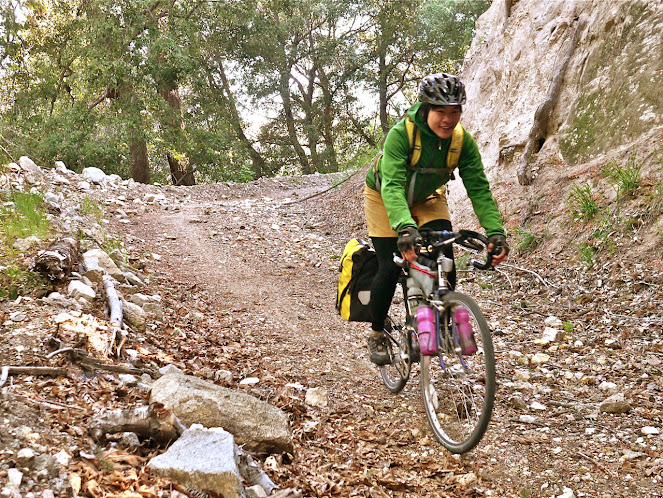 The bikewhacker in her element. Here, oaks and old roads through the San Gabriel Mountains

Cycling north from Southern California back to the Bay Area, I couldn’t make up my mind. Dirt or road? Apples or oranges? Plotted on a map, the predominantly northwest track loops and detours, an interpretive dance along the state highway system.

My intent was to follow rural roads on the backside of the Coast Range, generally hugging the San Andreas Rift Zone. Inevitably, I would spot a dirt road tangent. Confirming those findings with hiker, cowboy, a mountain-biking fireman — well, off I went. Without exception, that rolling strip of singletrack turned out overgrown, covered in ticks, a jungle of poison oak. I might have spent half my days riding dirt but, oh baby, lucky if I made one-third of the mileage compared to a day riding pavement.

Reluctantly, I realized my bike and my gear were not built for this sort of thing. My bike is neither Surly nor Salsa. This secondhand Miyata is an old lady from Taiwan with a Japanese name. Sure, she’s sporting a Revelate saddle bag, riding like a deer with it’s tail in the air, tucked safely out away from the chaparral thorns. But that bright pair of rubber panniers crashes through brush like big yellow elephants. My tires are neither knobby nor gnarly nor plump. I walk her uphill a lot. At times, downhill too. One day, she just plumb tuckered out. I carried her up the vertical ascent of overgrown switchbacks.

I admit to a certain covetousness for the bought elegance of a purpose built steed, outfitted in a bespoke suit of bikepacking bags, running monster-tread tires straight out of the motocross arena. And yet, every day I spent on dirt was stunning, stupendous, awesome. Under the full moon or a slow lingering sunset, spiritual even. I whack bikes around, whichever bike happens to be around. If bikepacking is the pinnacle of dirt road bike touring, then I am a bikewhacker. I am a bikewhacker and proud. 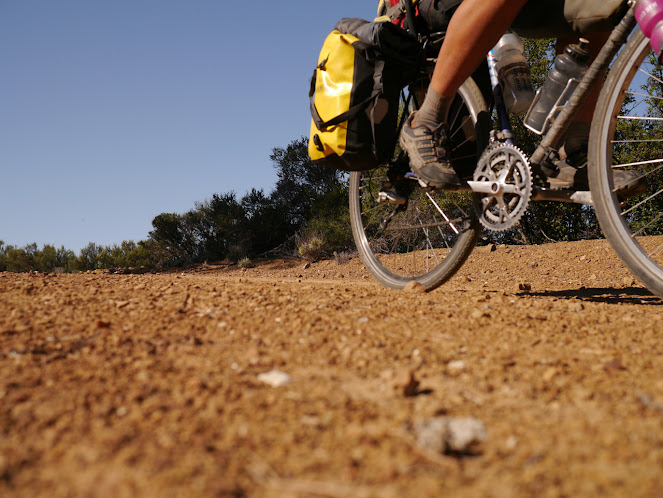 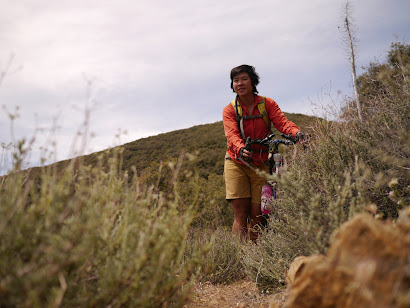 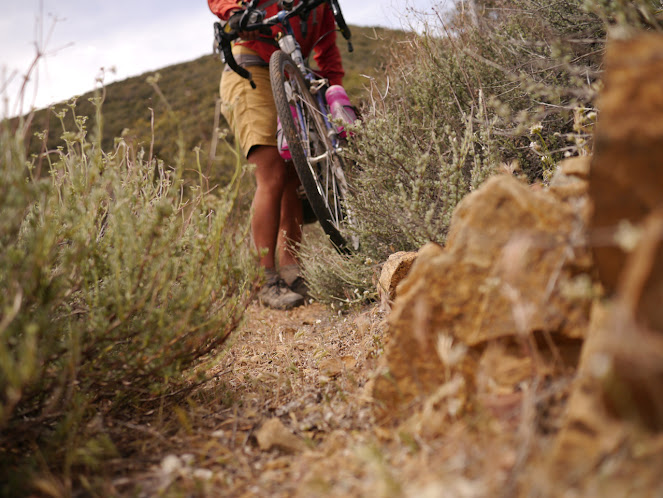 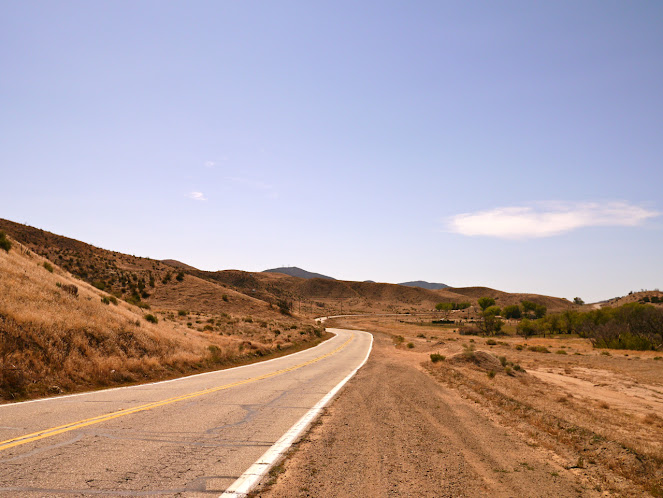 Pick a road and head for the hills. Lake Elizabeth Road threads westward, a welcome respite from the suburban crush of Palmdale. 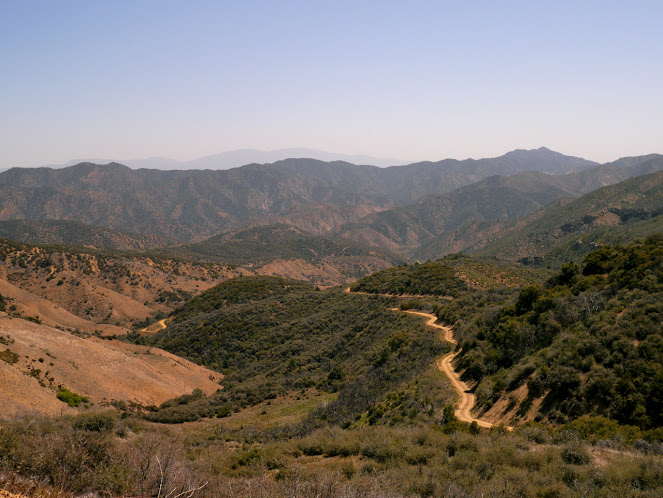 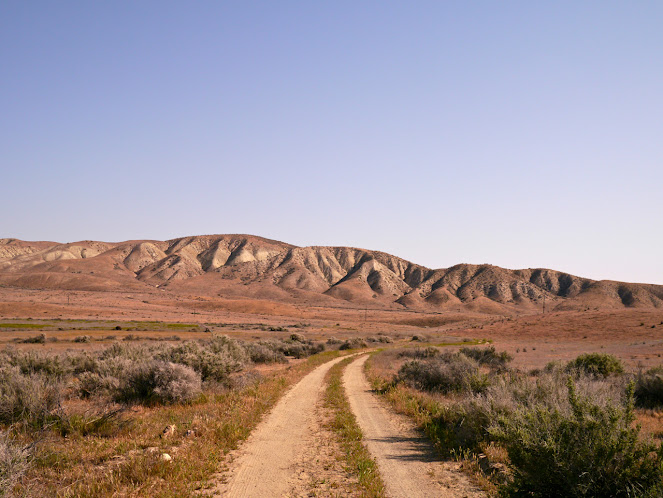 Early morning after wild camping in the Carrizo Plain, where the San Andreas Rift Zone is bordered by dramatically eroded Pleiocene hills. 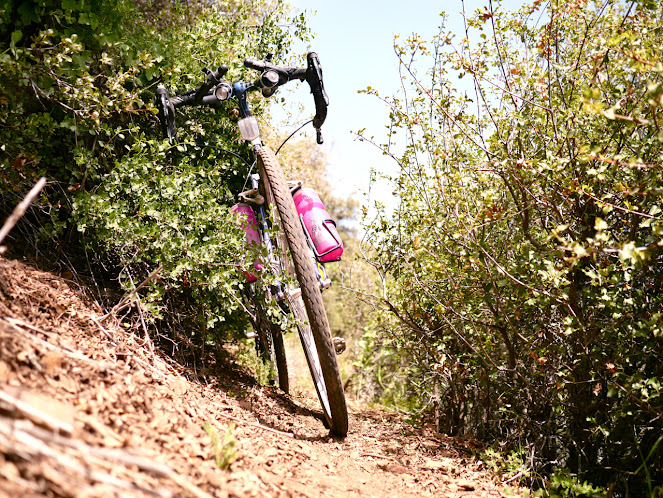 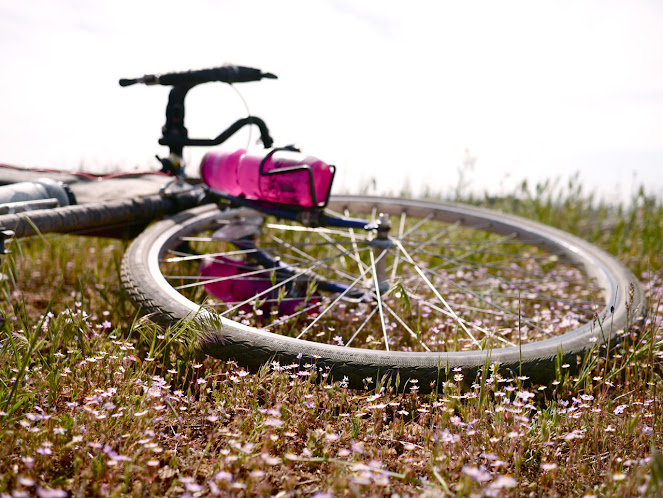 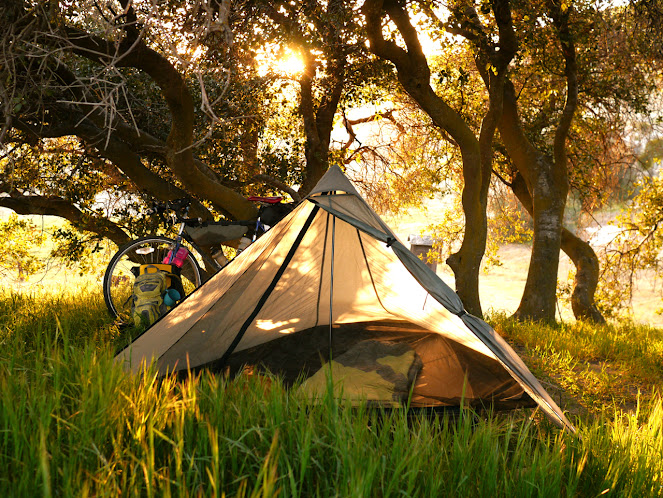 And it’s a perfect end to a long day of bikewhacking.

Ginger is a human-powered adventurer based in Oakland, California.
View all posts by Ginger Jui »
« Monroe Truck Trail: Riding Singletrack On Home Turf
The Bikemommas of CycloFemme »

9 thoughts on “Bikewhacking Across California”