Something feels different about my hometown. I’m visiting my parents after three months cycling in Mexico. Riding Amtrak to Los Angeles Union Station, I laughed to see that instead of sprouting cornfields, urban hillsides in LA sprout solar panels. New high-rises and condominiums have come up downtown, changing the skyline. Then, when I emerged out of the downtown core, the sharp profile and steep arroyos of the San Gabriel Range appeared. No doubt about it — these are blood-sisters of the Sierra Madre Occidental I crisscrossed through northern Mexico. 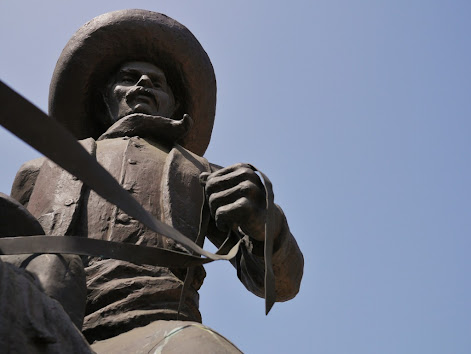 A bronze statue of Andres Avelino Duarte, former landowner of a vast holding at the base of the Eastern San Gabriel Mountains, gazes out upon the suburban bedroom community that now bears his name.

My parents and I used to take the family van into the foothills of the San Gabriels. They were yuppie immigrants who grew up hiking the humid, green slopes of Hong Kong — a brief respite from her crowded streets and tenements. The trailheads behind our Californian suburb were just ten minutes away. We scrambled up stream-side trails under a canopy of alder — sparkle-green in the spring, orange-umber in the fall. In the sweltering droughts of summer, we knew which waterfalls still burbled with confidence.

Within days of coming home, I was dreaming of dirt. Of shredding familiar canyons, portaging the streams and picking poison oak out of my butt. I unloaded my bike, put in a load of laundry, and headed for the hills. 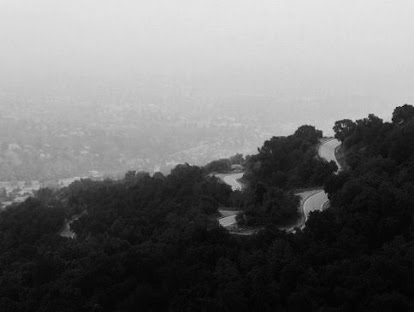 The suburbs more or less look the same as I pedal east to Big Dalton Canyon, three or four suburbs over. They all look like the California Dream. Air-conditioned ranch-style houses are fronted by thirsty green lawns and the occasional orange and avocado tree. The sprinklers are on. One put-put-putting sprinkler head has gone rogue and is drenching a shiny SUV parked in the street.

Although most suburban streets dead-end at the foot of the hills, some follow arroyos deep into highcountry. I swing north onto Glendora Mountain Road. After months of dust, grit and seawater, the worn bearings in my bottom bracket count pedal strokes like a metronome.

It’s sheer pleasure to just “go for a ride” and not worry about where I’ll sleep tonight. I stop for a photograph but when two skinny kids on road bikes pass, I pedal on. My bottom bracket protests in double-time but I huff on, keeping pace with the kids. 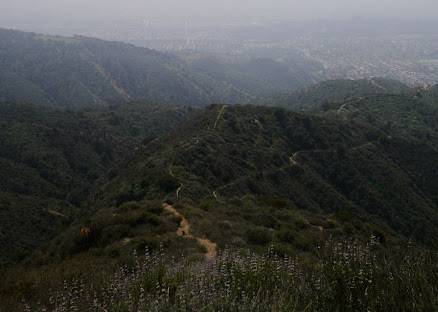 The Monroe Truck Trail originated in the 1920s to access a mine and a small settlement. More history at the Glendora Natural History website.

The young, steep geology of the foothills make for sandy and bouldered valley bottoms — rough going for mules, horses and people alike. Because of this, many original trails in the San Gabriels follow ridgelines instead. The first trails led to acorn-hunting grounds and then to firewood and cattle pasture. Later, trails and roads were blazed to access mines and homesteads, lodges and pack-stations.

Today, little evidence of active human settlement remains in our hills, excluded and then protected by the establishment of forest and wilderness status. Still, I think of the indigenes, ranchitos and Californios whom I passed farming and peopling the mountains of Mexico. I hear the silence in my mountains. No more pickup trucks blasting banda. No more clip-clopping charros coming home from the fields. No more rooster crows nor the clanging bells of goats scrabbling into brush.

As I muse, a shuttlebus pulls to the gated Monroe Truck Trail. A clutch of downhill bikers unload their heavy, full-suspension bikes. One straps a smartphone to his pack and turns up the heavy metal soundtrack. I grin and wave them ahead. I wait and watch them whoop-de-doo over a ridge. Then I descend into the canyon myself following the snake of singletrack. Back to the orderly urban grid below. 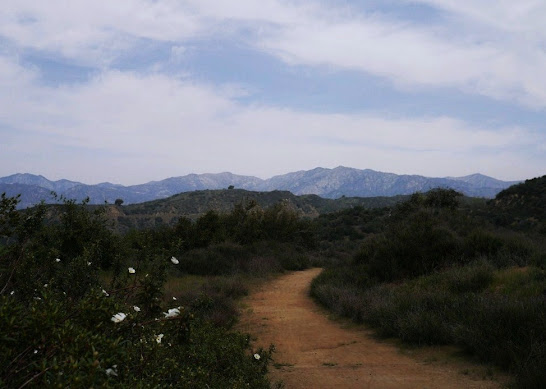 High country beckons but after three weeks off the bike, I’m content with descending the chaparral ridges. 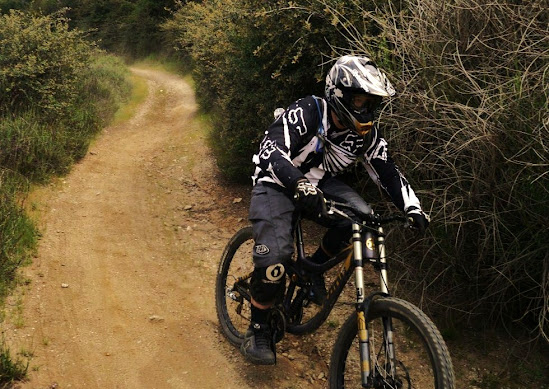 The trail is popular with downhill bikers shuttled to the top by an enthusiastic Frenchman. http://www.crazybearbikes.com 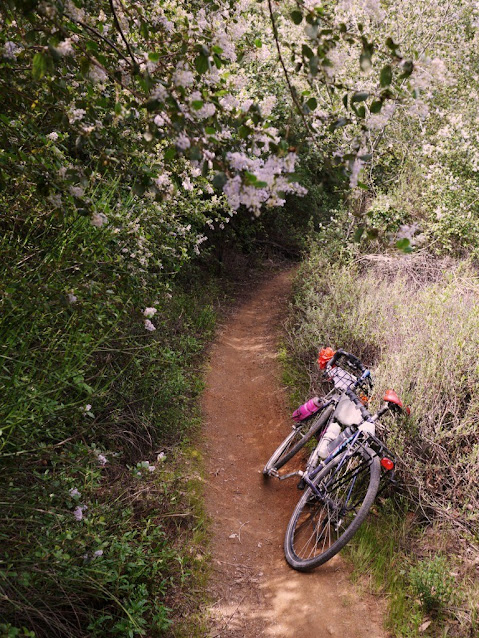 A trail edged with flowering Ceanothus feels unabashedly romantic — like a walk in the English countryside. 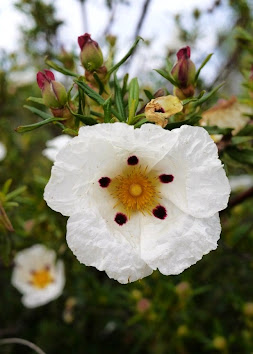 Cistus ladanifer, a naturalized shrub from the southwest Mediterranean region. It’s a poor disperser that favors disturbed habitat. I imagine a homesteading family transplanted it to the ridgetop at 3000 ft where I encountered it. 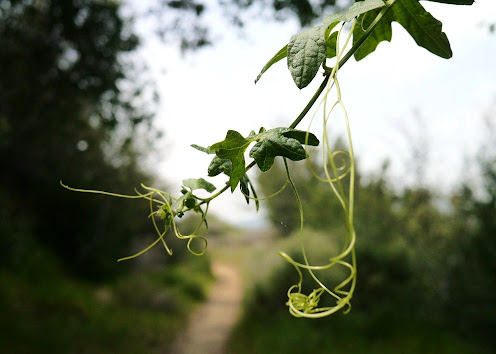 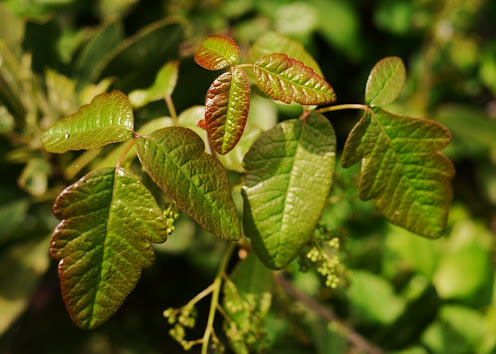 Lots of poison oak (Toxicodendron diversilobum) along the trail. I’ve had enough of the stuff whacking into my shins to know that I am immune (for now), unlike my buddy Jesse who blows up like a Goodyear balloon. 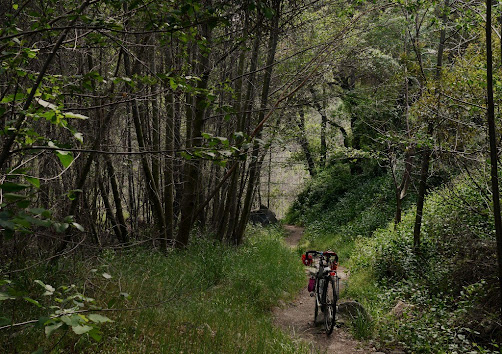 A quick descent and I’m back in the shade of black alders in the canyon bottoms.

Ginger is a human-powered adventurer based in Oakland, California.
View all posts by Ginger Jui »
« Who deserves to be crushed beneath a two-ton vehicle?
Bikewhacking Across California »