Posted by Ginger Jui ⋅ February 2, 2013 ⋅ 3 Comments
Filed Under  Al Jazeera, bike advocacy, Casa Ciclista, Guadalajara
My buddy Owen stayed in many a Casa Ciclista during his ride from Buenos Aires back to Oakland. He described the casas as “living rooms” for local cycling communities. These are places for cyclists to gather, hang out, fix bikes, host cyclotourists, and foment bike revolution. 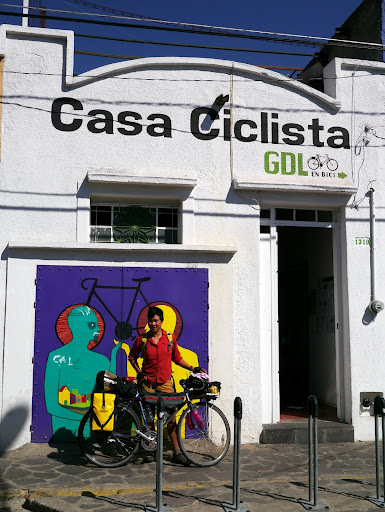 Home sweet home for a couple days or a week or…

The Casa Ciclista in Guadalajara is run by GDL en Bici, a young and energetic bicycle advocacy group at the center of the city’s bike scene. Five years ago, they started convening a monthly Critical Mass style night ride in the streets of Guadalajara. Now, there are rides every night of the week and over 30 loosely affiliated bike organizations. GDL en Bici is the most visible face of the bike revolution in Guadalajara. They reach out both locally and internationally by hosting cyclists at the Casa Ciclista storefront and by publishing a bi-monthly magazine (sales of which *hopefully* pay the rent). 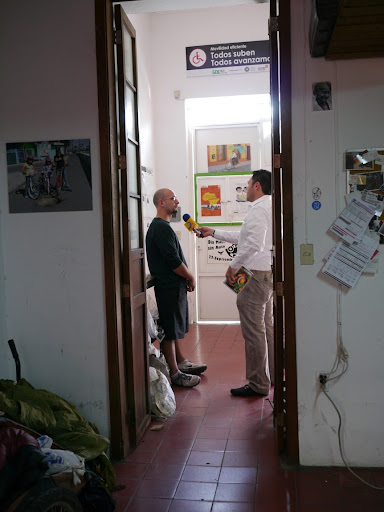 Jorge being interviewed for a television spot on the night rides popping up around the city. Even though bike culture has taken a life of its own in GDL, the public attributes most urban bike antics to this group.

GDL en Bici also installs bicicleta blancas — stripped of parts and spraypainted white — to commemorate cyclists who have been killed on the road. White bikes are a symbology used in many cities around the world. Here, one activist likens them to the skeleton of a bike, linking bicicleta blancas to the dancing calaveras celebrated in Mexican folklore during Día de Los Muertos.

Guadalajara’s staggering number of cycling related deaths is a catalyst for GDL en Bici’s activism. A sign in the casa states that 97 bicicleta blancas were installed in 3 years and 2 months. This number is sobering, but unsurprising. The city’s driving culture takes a page out of Hollywood’s Fast and Furious franchise. The single piece of bike infrastucture is about a kilometer of segregated bike lane at the city center. I rarely ride it because of bad visibility for drivers both turning in and out of the roadway. A stack of ghost bikes stands at the ready in the Casa.

Despite the grim statistics — and indeed as a political and counter-cultural response — cycling culture and bike love thrives in Guadalajara. Last night, I was extremely honored to attend a screening of a documentary about GDL en Bici in the company of the filmmaker and many members of the group. We began the evening with a casual paseo through central Guadalajara — that is, a group bike ride braving the crowded, smoggy, car-choked main streets that characterize this fair city. However, we soon turned off into one of the city´s many plazas. The three cycle tourists on the ride (all staying at the Casa Ciclista) were treated to the sight of grandly colonnaded buildings lit up in the night. 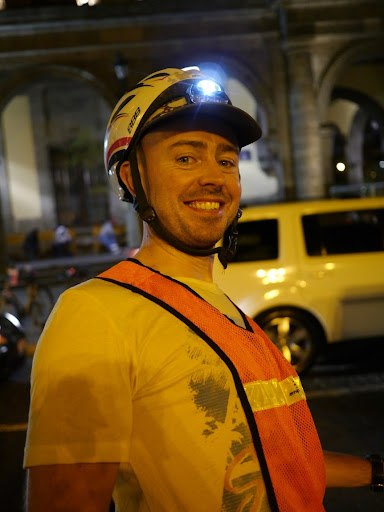 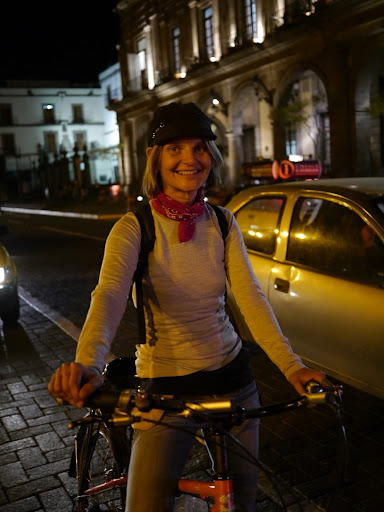 Heather has been traveling by backpack, motorcycle hitching and now bike since 2004. Ask her about the time the police tossed her in jail in Cambodia and held her passport hostage. 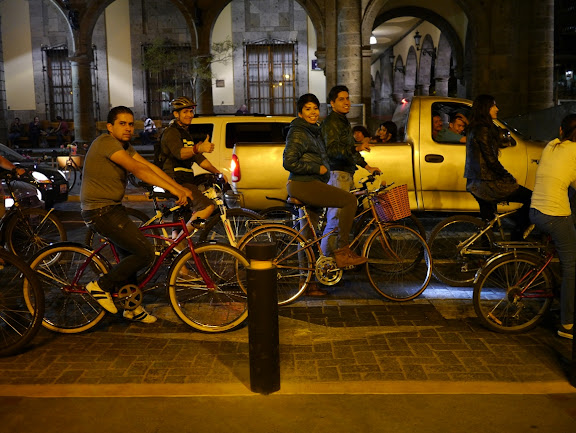 Local cyclists on the paseo.

The paseo ended where we started at Foro Cafe. This joint in downtown Guadalajara had a belly like a whale. The modest storefront — slinging cappucinos and chocolate cake — swallowed a couple dozen cyclists AND our bikes. After filling one room with indoor bike parking, we emerged into a darkened theatre space with 3 tiered stadium seating. At this point, my camera started barfing grainy high-ISO pictures. 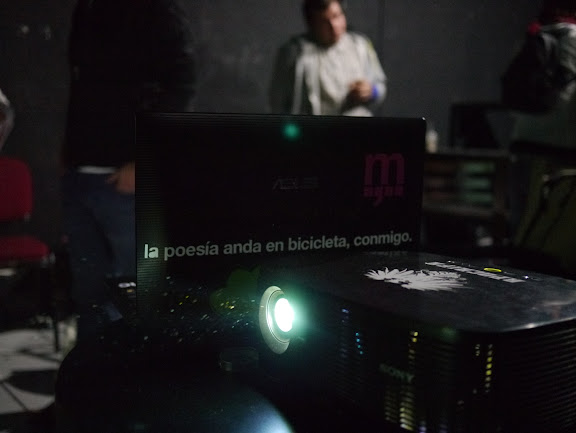 Poetry rides a bike, with me. 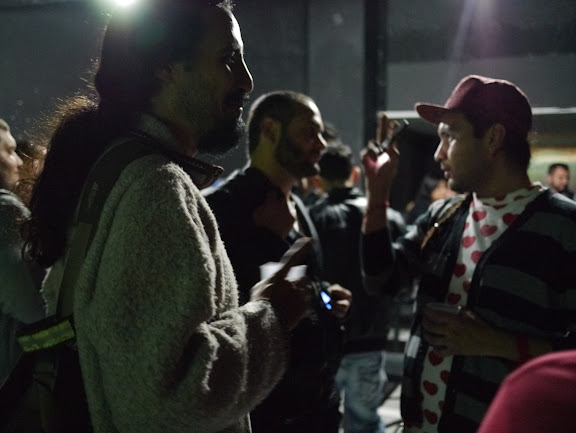 The 25 minute documentary Over the Wheel follows Yeriel (left) as he leads the Guadalajaran bike revolution — in a blue lucha libre mask. 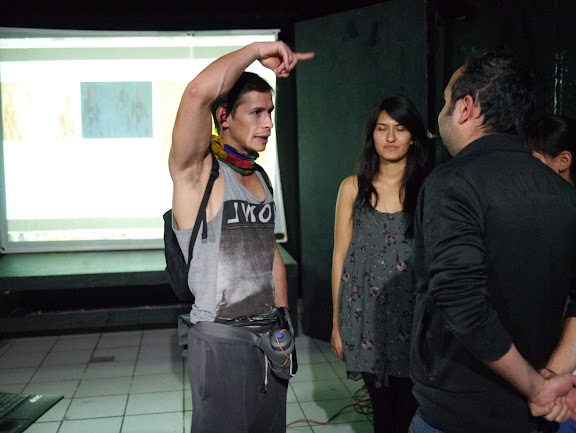 What can I say, I like a dude who rides a 29er mtb bike and wears Alan Ginsberg’s Howl on his shirt. And a fanny pack.

The evening also featured the launch of Apócrifaart magazine’s 13th issue. The theme was bicicleta. This locally published online magazine was thoroughly international in content. A Chinese artist painting shadowy, monocolor cyclist silhouettes. Ecstatic, political bike art from all different states in Mexico. Bicycle jousting from the US of A. The issue is not yet online, but damn straight I’m looking forward to getting hot and steamy with it. 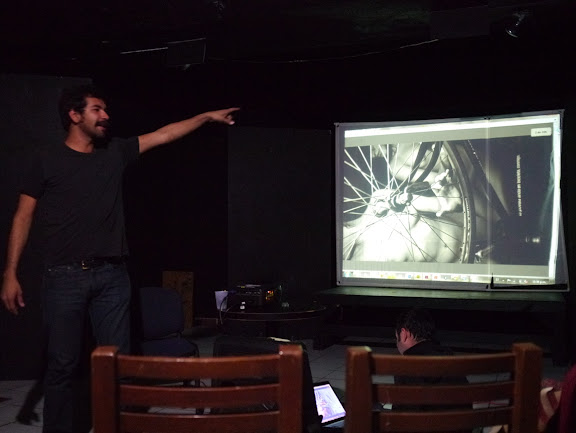 Back home, I’m pretty plugged into to the bike community — urban cycling activists, community bike shops, mountain bikers, the odd bike race and alley cat. I help out some with the local bike advocacy group. It’s a really local thing. Yet, despite my terrible Spanish, I find I speak the same language as the bike peoples here. Whether it’s the EBBC or GDL en Bici, we are at the frontlines of a global bike culture. They marvel at the money that the Bay Area is pouring into bike infrastructure. We marvel at the Sunday ciclovias across Latin Americas, where every Sunday miles upon miles of city centers are closed to auto traffic. They vent frustration at their slow and unresponsive city government. We do too — but despite the endless meetings and paperwork, I now know how lucky we are to have bike committees and city cycling coordinators working for us inside the system.

The Casa Ciclista provides more than just hot showers and free internet. It has given this bike activist a home away from home — and a chance to share its awesome with all my friends.

The 25 minute Over the Wheel documentary premiered on Al Jazeera earlier this week. Check it out (Owen, is that you salsa dancing?!?). Just another reminder pay attention to Arab news.

Ginger is a human-powered adventurer based in Oakland, California.
View all posts by Ginger Jui »
« The Spoke International Cycle Touring Team
Offroad to Puerto Vallarta »