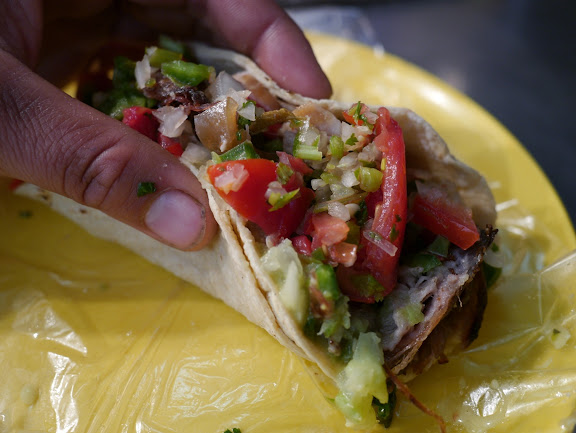 Carnitas taco at the Mercado del Hildalgo in Guanajuato.

Traveling in Mexico, chances are you’re gonna wake up barfing in a cornfield. Three days after North Oakland buddies flew down to find me in Guadalajara, the turista (also known as Montezuma´s Revenge) had them coming out top and bottom. We were camped in a cornfield at the border of Jalisco and Guanajuato state. I woke up in the middle of the night to sounds of explosive hurling from the other tents.

I was lucky — either I didn’t eat the refried beans, or my guts had acclimated to the Mexican stomach animales after a month of travel. A trio of locals passed the group of us, bikes and tents and people strewn about a cornfield outside of town. We must have looked a mess. They — no doubt with good reason — asked, “What are you doing?”

A week later, my friend Vajda had a second coming of the shits. We’ve decided to ditch the tour for a couple days. Instead, he and I have holed up in the pretty colonial city of Guanajuato while he nukes the gut bacteria. With full recovery on the way, I’m hopeful of fattening him up again on the riches of Mexican cuisine. In celebration, here’s just a sampling of what I’ve been sampling, down south. 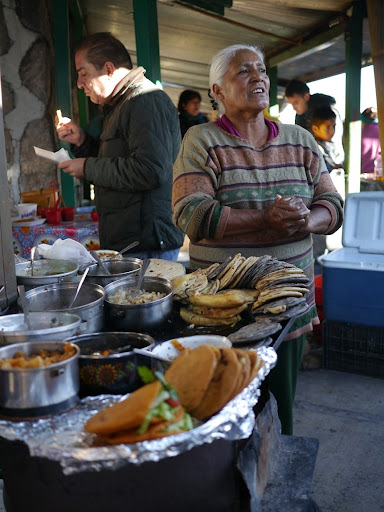 Selling gorditas at the Divisadero Station along the Copper Canyon Railways. Rounds of corn tortillas (blue, yellow and orange!) are heated on a charcoal brazier and stuffed with your choice of filling. 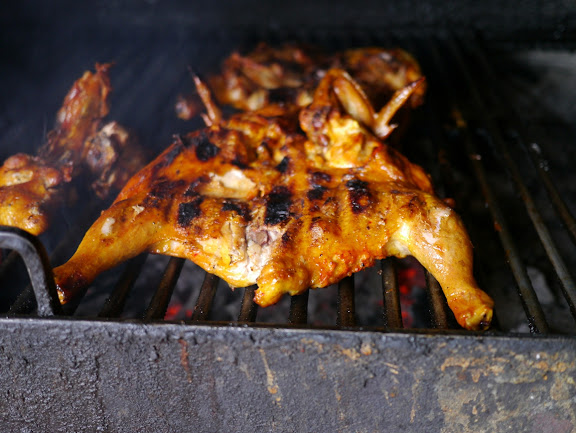 Pollo al carbon. I gorged myself after 6 days of naught but tortillas and frijolitos on the backroads of la barranca de cobre. Starved for fat and protein, I ducked into the first grilled chicken shop I saw in Bahuichivo. 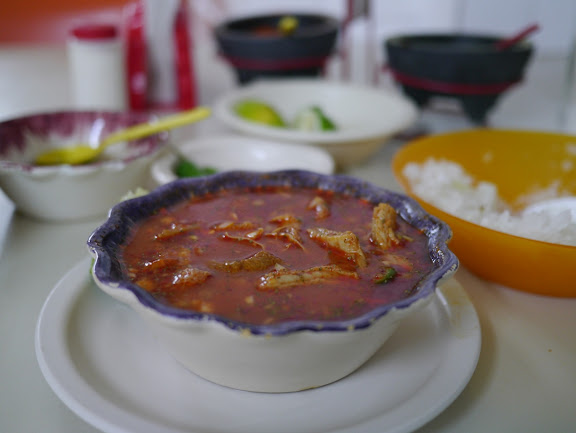 After a rough 12 hour bus ride from Chihuahua to Zacatecas, nothing cures the soul like a big stew of cow intestines. The ultimate Mexican hangover cure: menudo! 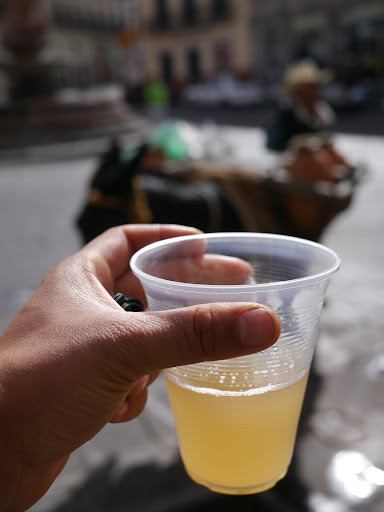 Agua miel, served from crock pots on a burro´s back. This “honey water” is pressed from the heart of the mezcal plant. 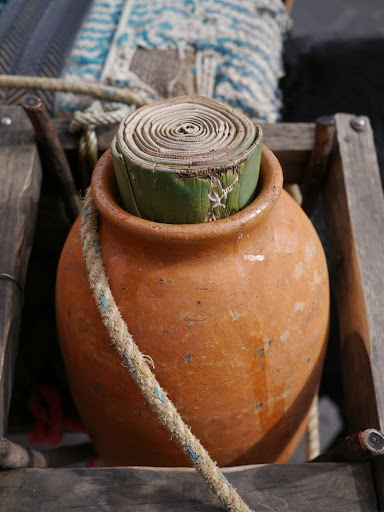 A crock of agua miel. 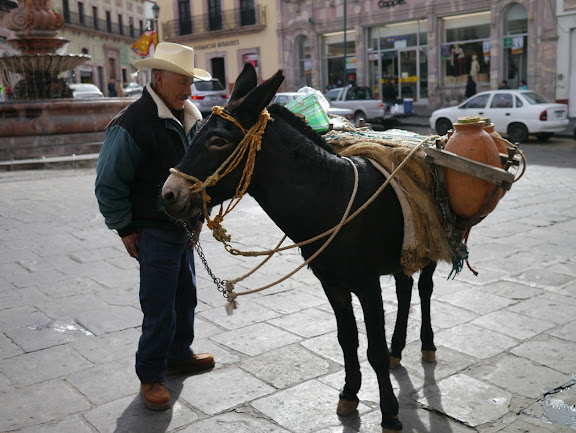 The man and his burro. It takes him 2 hours to ride to town and he hangs around until all 20 liters of agua miel is sold. 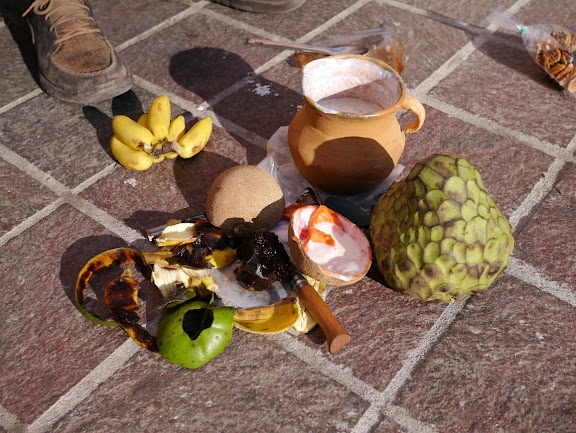 Breakfast! A crock of jocoque (homemade yogurt, fizzy and tastes about like a cow´s teat) with a crush of tropical fruits: cherimoya, sapote, mamay, little bananas and a dash of dried and candied tamarind with chili and salt. 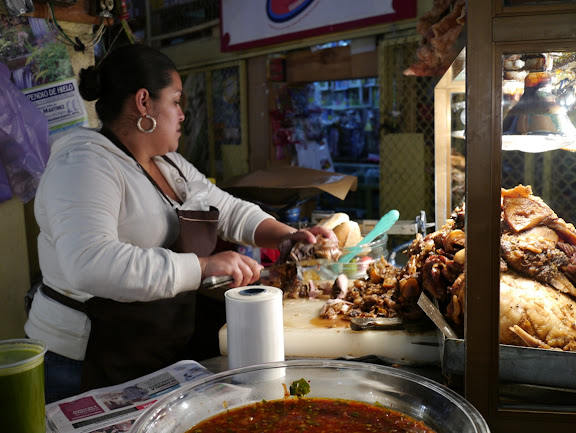 The carnitas lady at the Mercado del Hildago in Guanajuato! I am in love! She makes me a torta stuffed with roasted pork and extra skin, smothered in a tomato and chili salsa with an extra lavish of creamy green guacamole. 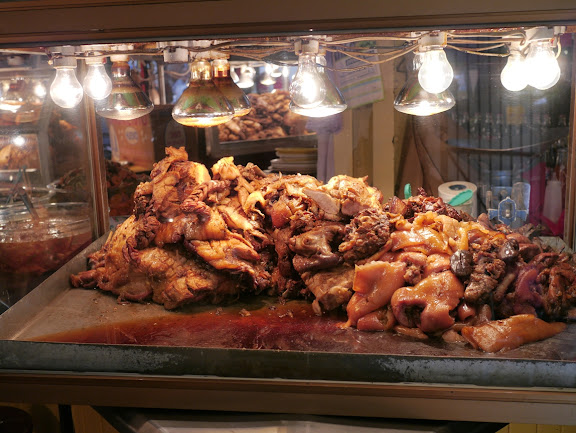 How could you not be convinced by the giant pile of meat and the glistening pile of skin with semi-identifiable liver and heart parts. I watched the love of my life ladle the thick brown juice and fat over the heap. She said it takes 2 hours to cook the meat and it is marinaded with milk, orange juice and … well, the rest was lost in translation. 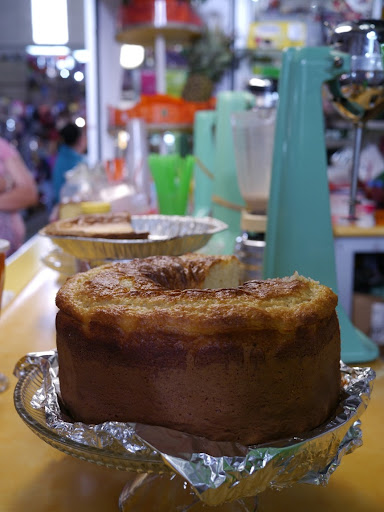 Breakfast this morning was a fresh squeezed orange juice and a big ol’ slice of cake from the licuado stand at the market. 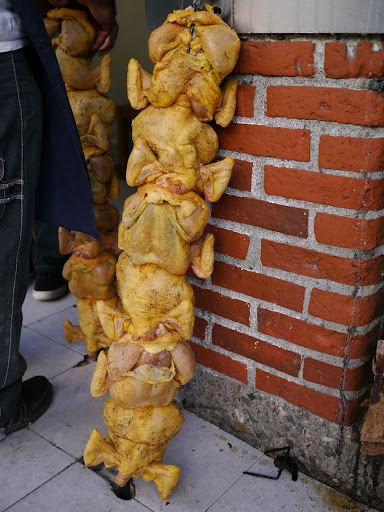 A skewer of chickens ready for the wood fired spit roaster — or as we call it, CHICKEN HELL!! 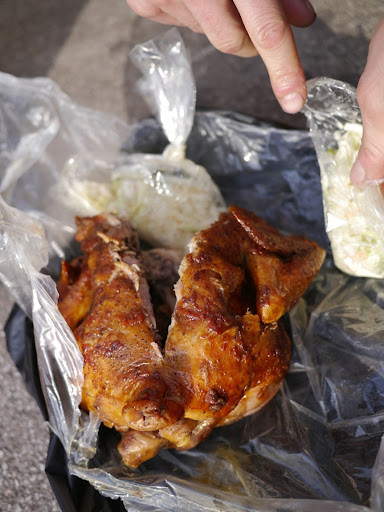 The juicy, falling off the bone product of chicken hell. Eaten with a baggy of coleslaw.

Thank goodness for the cyclotourist´s metabolism. I have been gorging with a passion — triple breakfast and double lunch! Despite stuffing myself with all sorts of adventurous foods, I’ve only had 2 episodes of the rumbly stomach. Nothing serious. My advice? Take it slow, episodically inoculate yourself with street food and only drink filtered water, either from the bottle or through a ceramic filter when in the backcountry. Good luck friends, and happy eating!

Ginger is a human-powered adventurer based in Oakland, California.
View all posts by Ginger Jui »
« The myriad delights of Mexican Buses
The Spoke International Cycle Touring Team »