Independence Day Ride Around the Bay!

Posted by Ginger Jui ⋅ July 6, 2012 ⋅ 3 Comments
Filed Under  Outlaw Rando Society, San Francisco Bay
With legs strong&fresh off bike tour, I circumnavigated the San Francisco Bay on the Fourth of July! The group rode a goofy collection of rigs, including a singlespeeding Hooligan,  Blacksheep beach cruiser (fixed), a Soma with track drops (also fixed), a 14 speed Rohloffed Sycip cross bike, and me on the aluminum lugged carbon Allez, sporting a borrowed pair of tri bars. 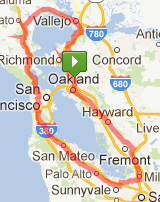 Our circumnavigation was chosen to minimize elevation gain and clocked out  somewhere between 170 mi (Google Maps) and 180 mi (Katie’s GPS from last year). Route here. At Novato, we were on track to beat last year’s 13 hr record with help of a strong tail wind surging inland from the Bay. Once turning east, this became a bike spanking crosswind. Rounding the North Bay onto Mare Island, we were hit by double-whammies of a gusting headwind and one of the riders half-wrecking himself on the railroad tracks.
The two fixed gear riders turned off there for home pastures in Concord — which was still a 30 mile ride across the Benicia Bridge. Vajda, Jesse, and I soldiered on to the East Bay, finishing just before sunset and heralded by fireworks. BOOM!

Ginger is a human-powered adventurer based in Oakland, California.
View all posts by Ginger Jui »
« The Hole in the Head Gang Returns!
Bikes, Beers and Bavarian Hospitality at the German Tourist Club »

3 thoughts on “Independence Day Ride Around the Bay!”