The plan was to ride from the Golden Gate Bridge to North Marin, on dirt, and return via the Larkspur Ferry. Our adventure began at Katie’s house in the Mission, on Saturday night. I have next to no memory of any of this, because 12 hrs later, I’ll be on my way to the ER with a dented helmet, amnesia, and a concussion.

What a great lesson: always wear a helmet kiddies, and ride with awesome friends, or at least tell them where you’re going.

The following pictures are strangely familiar and deliciously confusing. Ride with me as I ask the question,

What the hell happened? 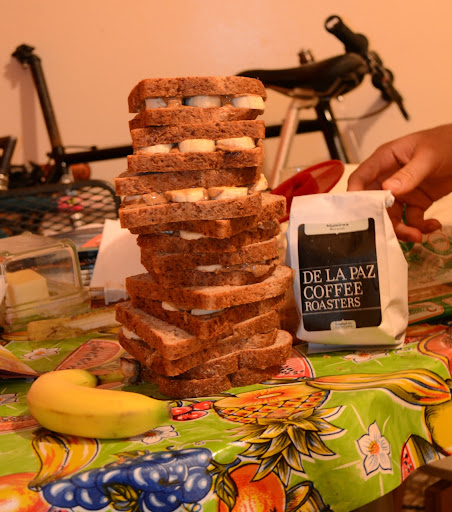 Just a lil’ motivation to get the guys out of bed at 6am. I remember making this stack of almond butter and banana sandwiches and watching it slowly. slowly. slowly. topple over. Who knew sandwiches had such a high R value? Or is that a Boltzman Constant? Wait. What?
Post-note: I was thinking Reynold’s number. As if we could assume the sandwich stack is a viscous fluid. Pish.

Now, before the adventure begins, a brief interlude. Because not only are my friends handsome, they ride the darnedest bikes. Peter and Jon, I don’t mean to imply you’re not handsome or don’t have awesome bikes because your pictures aren’t here. I’m just missing pictures. Just like I’m missing memories.

At this point there’s a memory and photo gap. The story is, we hit the Miwok Trail and drop onto the bit of singletrack that leads to the Miwok Stables. The guys tell me I was out front and we had crossed a little wooden bridge near the beginning of the trail when I bit it.

The guys walk me off the mountain. At Miwok Stables, they hitched me a ride to Marin General, where I was given a CT scan.

Apparently, Dr. Scott Duffy introduced himself at the ER and I asked,

When he came back to get me a CT scan, I looked up with adoring eyes.

I was discharged and received my paperwork. I read it over and saw his signature.

I was besides myself.  “It REALLY IS Scott Duffy!”

I woke up Sunday afternoon, swaddled in blankets on the floor of my roommate’s room. Someone has the great idea of putting a computer in my hands, and I blog, “I met Scott Duffy the TV Doctor and he SIGNED MY ASS!”

Sunday night, Adam, Katie, Jesse, Jon and Eli threw a dinner party at my house, during which I ranted and raved, flirted and danced and remembered almost none of it.  Jesse slept over and made sure I was getting better and not worse. Sharon and Peter visited me Monday morning (I was still raving a bit) and we ate take out dim sum in the sun. Brooke gave me a hug and Bridget girl-talked me on the porch swing. Aaron sends me pictures of me in the ER.

I woke up Tuesday morning to amazing gifts. A journal full of enthusiastic scribbling (BRAIIIINS!!!!), and a pair of Opinel carbon steel pocket knives fresh from the mail.

Tuesday night, Jenn fed me cookie dough and Lena fed me salad. Jon tempted me with a new round of 100 mile bike rides. Life is good.

And then Wednesday morning, I get a package from Santa Claus de la Bicicleta.

I feel like sleeping beauty kissed by the bike adventure prince. In all ways, I’m the luckiest gal this side of the Golden Gate. I’m off the bike for a week. But then. See you on the road, babes.
~ The Flaming Bike
AND WEAR YER HELMET.