What better subject of a vision quest than the Mt. Vision Ceanothus?  This blue flowering, low growing shrub is only found in Point Reyes National Seashore. There, it grows on the rolling coastal ridges where the San Andreas Fault dives into the sea. A quick dig through my herbarium database revealed that the type locality for Ceanothus gloriosus var. porrectus hailed from the very tip of the Pt. Reyes Peninsula. Armed with a road bike and handful of scrawled notes, I embarked on a botanical quest north.

My botanical foray into Pt. Reyes began with a Friday night sunset pedal across the Golden Gate. By night, the gatekeeping gauntlet of tourists had dwindled. Only a few diehard photographers remained as rear guard.

Passing northwards through Marin, the evening traffic thinned as its bohemian storefronts dimmed. I turned westward to ascend a low line of chaparalled hills. Pedaling on, the night dark redwoods became scraggling reaches of oaks. When woodland opened into starlit pastures, I made my camp for the night.

Sunset beyond the Golden Gate 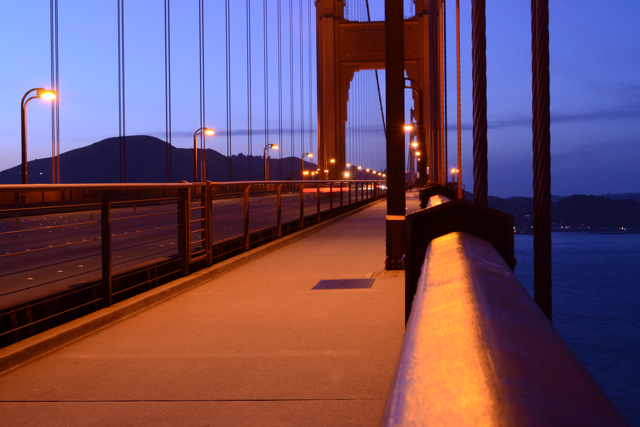 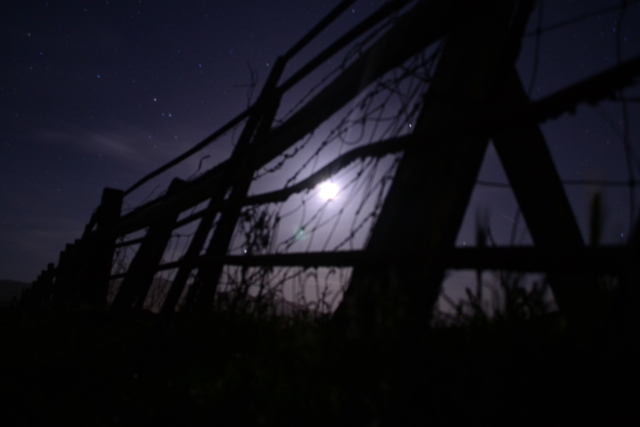 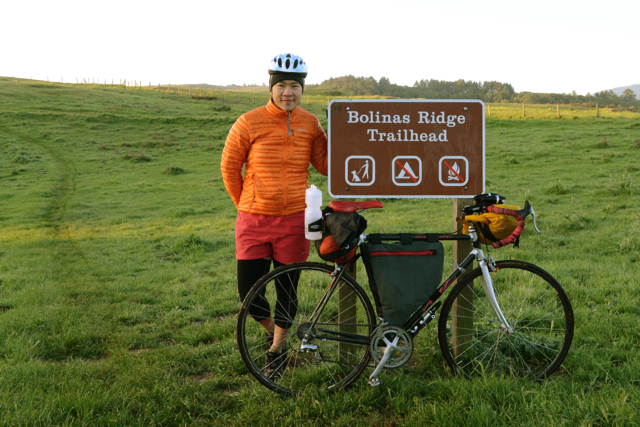 Oh my. Orange is not a stealth camping color.

I woke at dawn in a dew soaked pasture. A short pedal up the road, Perry’s Deli bustled with locals grabbing coffee and donuts. The man ahead of me at the register gave a laugh and counted out his eight dollars and change. “Mac, I better get out of here quick. You might realize you didn’t charge me more than ten bucks.”

My bananas, bagel, and Luna bars came to ten dollars and ten cents and I grinned back at him.

By mid-morning, I reached the northern tip of Point Reyes Peninsula and the type locality for C. gloriosus var porrectus. Bushwhacking at the summit of Pierce Point Rd, it dawned on me that the Tule Elk reserve was rather unlikely habitat. Mt. Vision Ceanothus is supposed to grow in bishop pine forest, not these well-nibbled swarths of coastal brush and grassland. All I found were Tule Elk and a park ranger keeping tabs on them. When asked about this rare plant, the ranger confirmed that I was indeed on Pierce Point Hill, but, what’s Ceanothus?

Oh well. I hear ungulates find the nitrogen-fixing Ceanothus a tasty, high protein snack. Having walked up most of Pierce Point Hill, I enjoyed the fruits of my failed cycle-botanizing foray — the descent.

Far from disconsolate, I tried my botanizing luck at Kehoe Beach. Along the way, I stumbled upon a charming patch of California poppy — or perhaps a sand dwelling subspecies? It had distinctively, suspiciously gray-green foliage, a prostrate mounding habit, and flowers mellow yellow. A quick Wiki revealed a match for Eschscholzia californica subsp. californica var. californica — a litany in botanical Latin.

The coastal bluffs above Kehoe Beach were carpeted in yellow blooms — goldfields, tidy tips, and bush lupine. Interestingly, the goldfields (the coast loving Lasthenia minor here) were only found on the shales of the Monterey Formation. Walking north along the beach, we find the Laird Formation’s sandstones and then granite, but no more blooms.

Marooned in Tomales Bay. The boat’s cabin was repainted in my banner colors: green and yellow, orange and red.

Tule Elk at the summit of Pierce Point Hill. 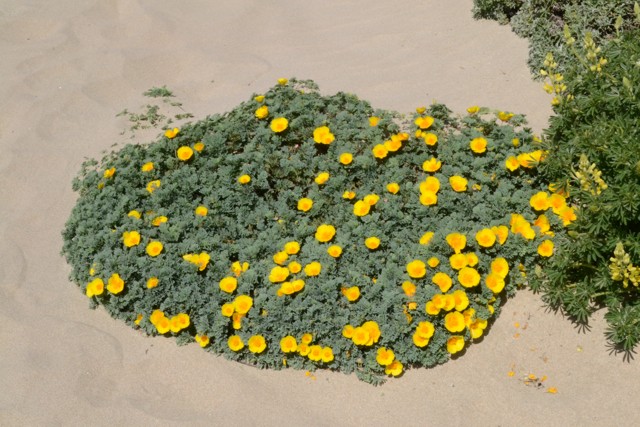 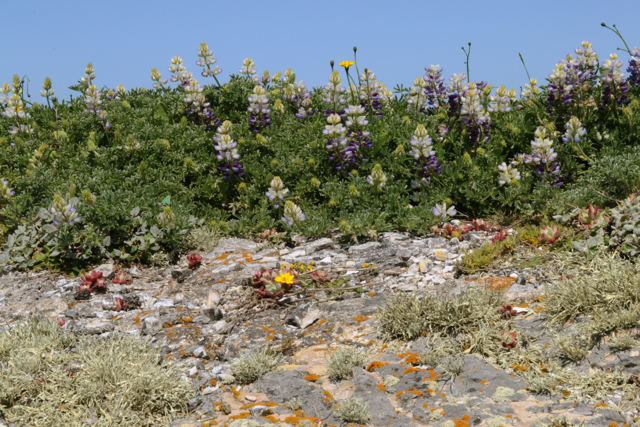 The ever perky lupine  (Lupinus bicolor) perched on bluffs above Kehoe beach upon a spine of weathered shale. 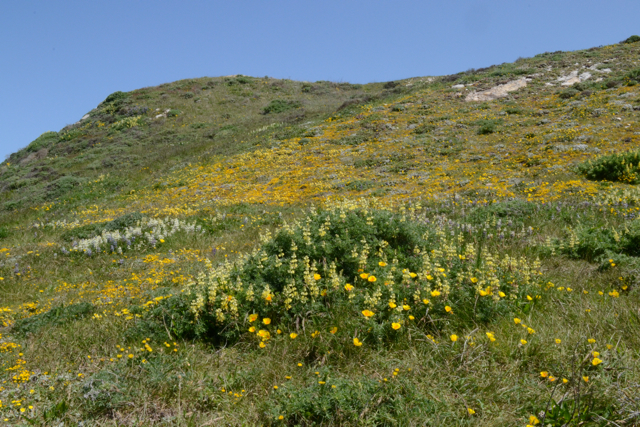 Continuing my quest, I pedaled and, in places, walked up Mt. Vision Rd on the basis that Mt. Vision Ceanothus would be found on its flanks. Though it evaded me once again, I was treated to a enormous display of blueblossom (Ceanothus thyrsiflorus) billowing from every hillside. Its success is due to the Vision Fire, which raged across Inverness Ridge in the tinder dry fall of 1995. The dense, post-fire regrowth of bishop pine and blueblossom formed a tree tunnel as I descended on the Inverness Ridge Trail back to Olema Valley.

I left the windswept peninsula behind for an ice cream sandwich at Point Reyes Station. Munching, I wondered whether to take a bus back to San Rafael, or to continue riding. With the prospect of an hour’s delay and a long, jolting ride back into the suburbs, I saddled up for a return to civilization. 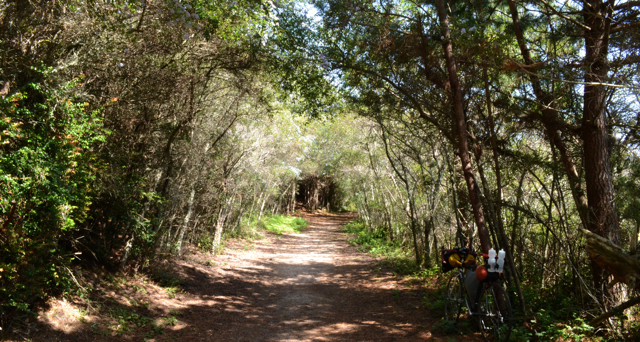 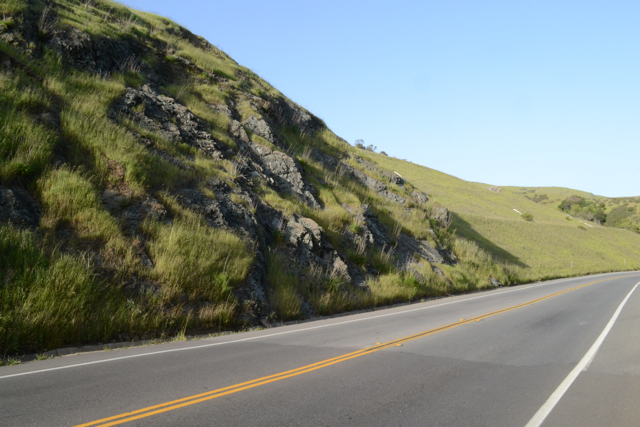 Dark shale at the summit of White’s Hill, before descending into Fairfax.

The summit of White’s Hill just north of Fairfax marked the end of a quest that began at the Golden Gate. The dark shale flanking either side of the road cut formed another gate, marking my descent out and away from the wild lands of Pt Reyes. All in all, a successfully failed quest. The holy grail remains for another seeker — or rather, the same seeker but next time carrying a GPS. ¡Adelante!

Ginger is a human-powered adventurer based in Oakland, California.
View all posts by Ginger Jui »
« Tandem Mountain Biking (and Hiking) in Tilden Park
Grrrl gets off the Internet. Rides mountain bike. »