Be sure to read about my first solo bike camping trip, in Part One of this post. Along the way, I saw this church slogan in South Hayward: 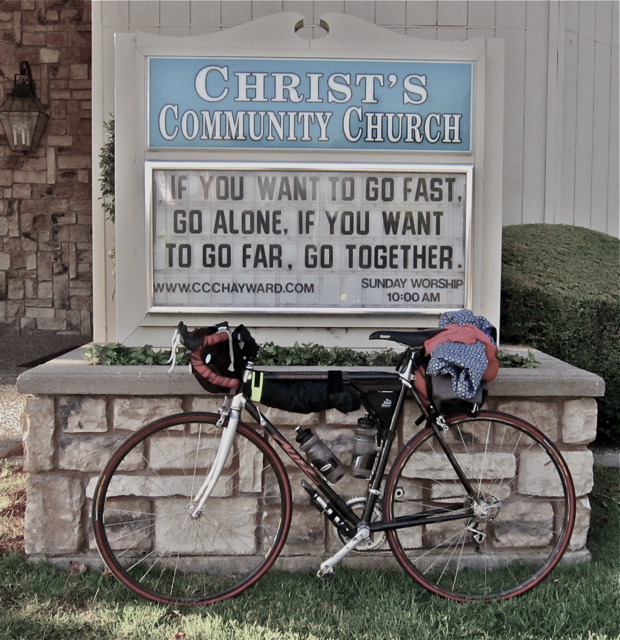 Milan Kundera writes about coincidences in The Unbearable Lightness of Being:

“[Human lives] are composed like music. Guided by his sense of beauty, an individual transforms a fortuitous occurrence…into a motif, which then assumes a permanent place in the composition of the individual’s life.”

The slogan in the picture says,

It struck me because I was going faster than I have ever before on a bike, and I was bike camping solo for the first time as well. The second part, however, rang false. I thought, I am going pretty darn far all by myself, thank you very much.

The day after getting back from my ride, I had to let a boy down.  He pushed hard and early that he was looking for a long-term relationship, even though we had known each other less than two weeks.  Yet, despite our extraordinary chemistry riding bicycles and romancing each other, I already knew I would not be happy with him in the forever sense. We were in different places and had different goals in life. I could not possibly keep mum and have my fun, so I decided to end things right away.

I understood then that I could interpret the church sign by its corollary.

On this second reading the message became a challenge, not an admonition. My brain and body are separated from yours by flesh and air. Flesh and air. Materials of lower conductance relative to my own brain-body connection of nerve and synapse. Traveling together necessarily compromises speed and efficiency. But traveling in numbers also promises safety, security and stability — and the possibility of summing our success to greater than our parts.

I have been after-burning energy, adventure and change since getting flung out of a long-term, impossibly stable relationship. The new boy got a “no” answer because I saw, perhaps assumed and maybe feared that he was a building a straight and narrow road plainly seen for miles, around which we’d build a one-horse town. I felt like Hell’s Angels riding in loud, fast and furious. I hadn’t yet even run down a tank of gas and I blew out of there before getting my butt landed in 35 to life.

Yet, I know that in traveling alone – this applies both to being single and to biking solo – I can easily begin to feel like a hermit crab lugging my home around on my back. I will tire and wish someone else could carry the burden, or at least I could draft behind them in a headwind.

I know I’m pushing myself hard. I know I’m hardly taking time for physical recovery in this process of self-soul recovery. I look forward to resting after wearying, and speeding ahead to pull — myself and whoever else is with me —  on my own power again.