The Living Mountain, by Nan Shepherd

Have you ever read something so tough, so intense, so true, that you had to shout? I just finished The Living Mountain by Nan Shepherd. The tension of it uncorked my throat and I threw out a coarse yell, both frustrated and elated.

Shepherd writes of the Cairngorm mountains in north west Scotland. She wrote the book in the forties, when she was young. Thirty years later, it was published when she was “an old woman…tidying out my possessions.”

When I began, the mountains were too foreign and the names for its features I couldn’t place — corries for valleys, burns for streams, and all the names overwhelmed with u’s and bh’s and apostrophes (the Dubh Loch of Ben a’ Bhuird!). I love regional writing for its intense familiarity, but with her I stumbled over the love of a place I have never been, of which I have no sense context. 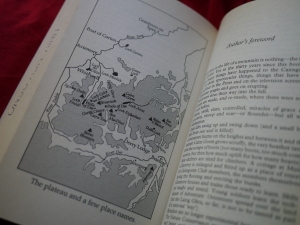 A map full of Gaelic riddles.

Then she brought me in. Broke down the mountains into its rocks and rivers, to the weather, the plants, the animals, and then the marks of man — from weathered cairns to the wreckage of WWII planes. And then finally, she drew out the marks of the mountain on those who walk and live them, the crofters and hill-walkers, the marks on the body and the senses, on herself. And through her, on me.

In the Berkeley hills, you can follow a footpath off the Claremont fire trail through a patch of scrawny oaks to a pair of labyrinths — doubled spirals built of the crumbled Franciscan rock. You come over a hump of hill and gasp to find San Francisco Bay so close you could leap into it. Shepherd describes this trick of distance in the mountains.

“I stood once on a hill staring at an opposite hill that had thrust its face into mine. I stared until, dropping my eyes, I saw with astonishment between me and it a loch that I knew perfectly well was there. But it couldn’t be. There wasn’t room. I looked up again at that out-thrust brow — it was so near I could have touched it. And when I looked down, the loch was still there.”

Reading “The Living Mountain” is like being spun with my eyes closed, then opening them again to walk the labyrinths. Her writing — like Anne Dillard in Pilgrim at Tinker Creek — plays on space, zooming outward from trees and summit, closing inward to our innermost senses. She leaps from peak to thought to peak. It takes all my concentration to follow the spiraling path — each pebble, each word a marvel — but when I lift my eyes the huge, glimmering bay threatens to swallow me. Caught in between the tension of reading each word and the immediacy of Nan Shepherd’s vision, I burst into a yell. I stop myself from throwing the book across the room.

As I finished the book, I realize I’ve been unconsciously collecting writers who seek this inside-outness. That is, exploring our insides, what’s behind our eyeballs and trundling through our guts, by walking mountains, peering into creeks, and exploring even the street canyons of our cities. Anne Dillard at Pilgrim Creek, Rebecca Solnit guiding us on getting lost, and Gretel Ehrlich on being struck by lightning. And then there’s Mary Austin’s shadow – she crops up again and again in collections of California nature writing – striding the desert valleys fearlessly wondrous.

I’m going to read her next.

Ginger is a human-powered adventurer based in Oakland, California.
View all posts by Ginger Jui »
« Always Talk to Strangers: The Boxer
Dirty Overnight: Black Diamond Mines »

One thought on “On Reading Mountains”