How To: Teach A Cyclist to Sail 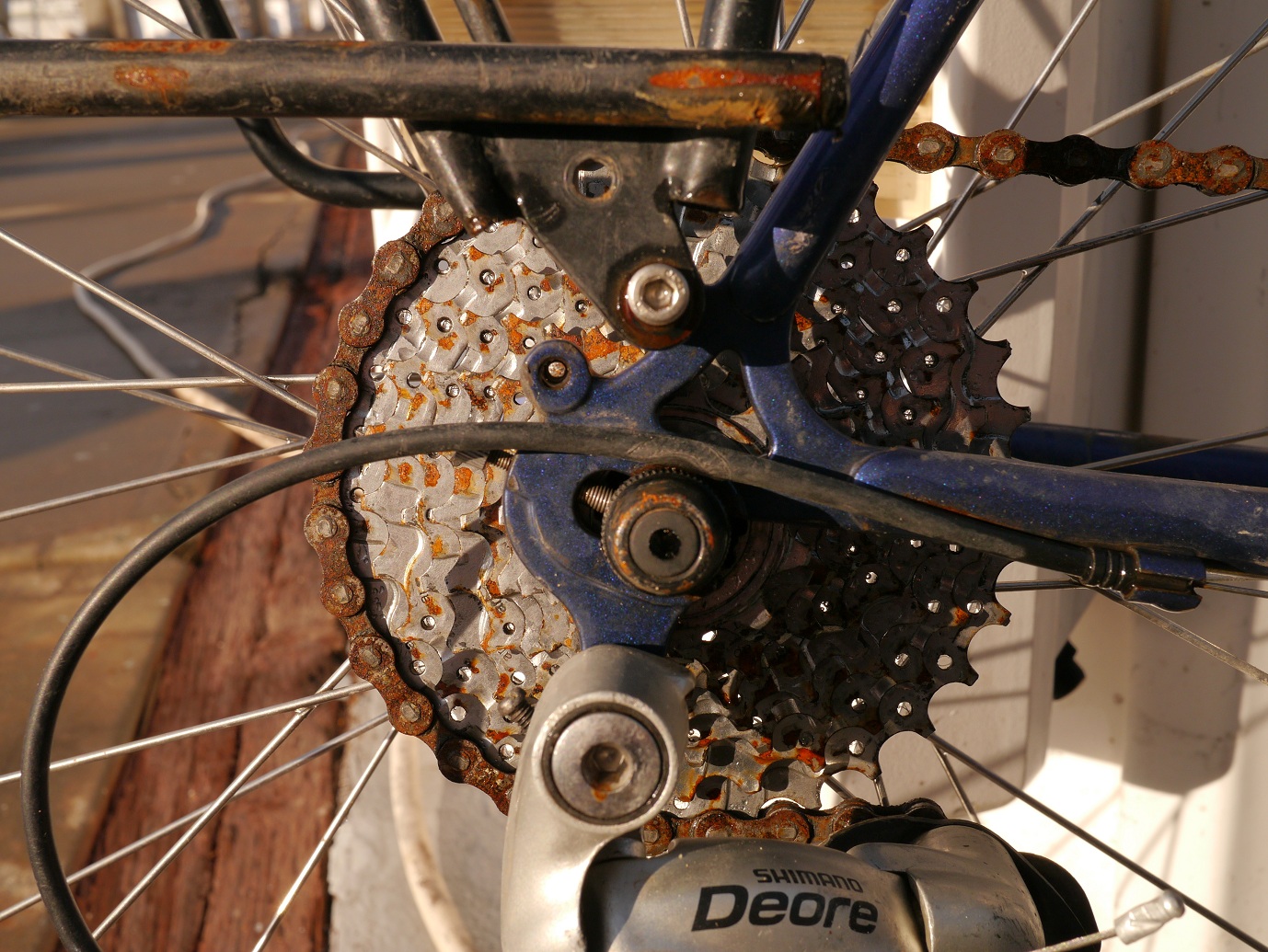 After 2 weeks at sea.

While bicycles venture reluctantly to sea, cyclists are undeterred. During my bike tour in Mexico, over and over I heard of cyclists hitching boats from Baja California to the mainland. One guy ended up commandeering the sailboat from his host after losing their motor, breaking the boom traveler, and ripping the mainsail. Another found himself rescued by the Mexican navy after the boat broke up in the the middle of the Sea of Cortez.

In Puerto Vallarta, I found a Canadian motor-yacht headed to La Paz. We crossed the Sea of Cortez as winter storms passed heavy swells down the length of the peninsula. Bashing north, ten foot waves pitched the bow skywards and hurled it down again. My bike was lashed to the bow and I feared it would be catapulted into the foam.

When the seas subsided, porpoises swam up to play in our bow wake. At night the phosphorescence gleamed under a starless and moonless sky. I knew the next time my bike and I went to sea, it would be on a sailboat and I would know what the hell I was doing.

With that prelude may I introduce Kismet, a 24ft Seafarer sailboat parked in the Berkeley Marina. 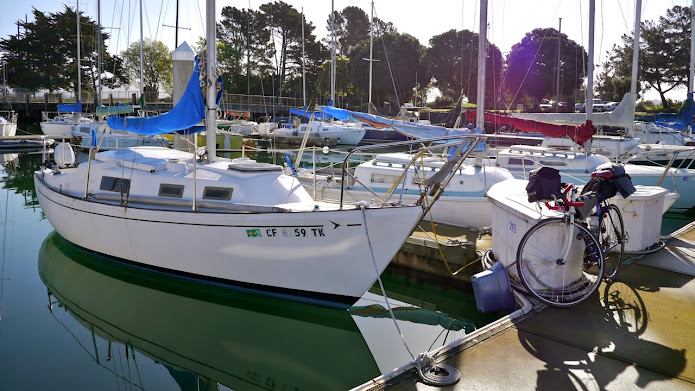 After returning from Mexico, I almost immediately found a job at a youth mountain biking non-profit. The afternoon winds funneling through the Golden Gate bring a smell of salt and sea to my desk. The kids are out biking while I keep the books.

Everyday I break my promise to never work a desk job again, but for now, it pays the rent.

I rejoined the CalSailing Club for windsurfing and dinghy sailing. I hung around the Berkeley Yacht Club with a six pack of beer until someone picked me up to crew during Friday night races. Then, late in the year, I found a Craigslist ad for a boat-share. She was a sleek, tidy boat, parked in the Berkeley Marina and shared between 4 or 5 guys all from the Bay Area.

I later asked my boat-share partners how they picked me. There must of been a heap of desperate sailors who answered their Craigslist and Latitude 38 ads. All competing for the privilege of throwing money at a boat-shaped hole in the ocean.

“Totally random,” they said. “We just opened your email.”

After work, I bike just a few minutes over to the Berkeley marina. I carefully step across the gap separating dock from boat. It rocks under my weight. I clip on the halyard and hoist the jib. I pull the jib sheets along the beam of the boat, through light tackle and wind them around a pair of sea-bronzed winches. I heave and lower the motor (a concession to safety and my sailing illiteracy) and wait for my boat partners to arrive in their pickup trucks. We sail out into the night. Out there. Out where our surrounding metropolis is rendered an incandescent and diminutive rim while the bay herself grows all out of proportion into a plain of darkness.

A cyclist traveling the skin of the earth must eventually exchange her bike for a boat. I have fallen in love with the bay and the ocean her mother. She permeates my urban life with wildness. I wake every morning tasting the rime-laden air where she has passed. I leap on my bike and ride downhill to the foot of the bay, to work. At sunset, I leap on my bike and ride home again, following the fog that rolls in from the ocean across the bay and comes to rest upon the East Bay hills.

I am proof that you can teach a cyclist to sail. I hope you are too. 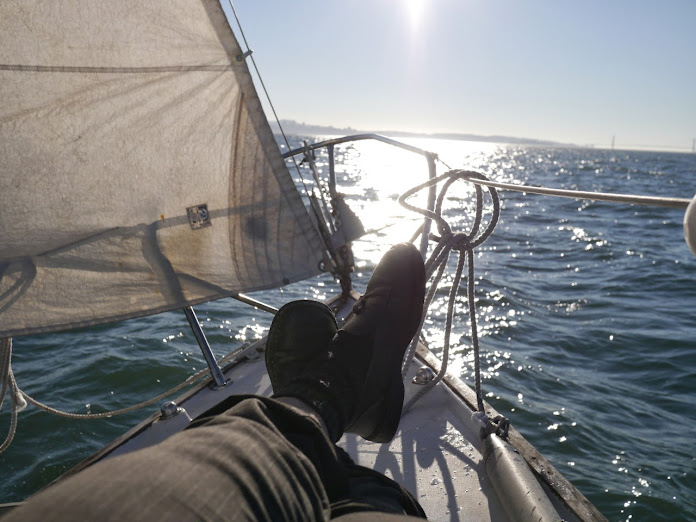 The cyclist exchanges bike for boat and cycling cleats for comfy boat shoes. 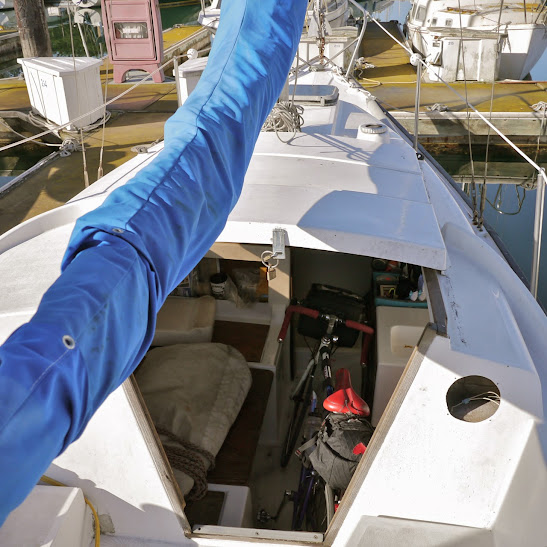 My bike fits inside! Wow! 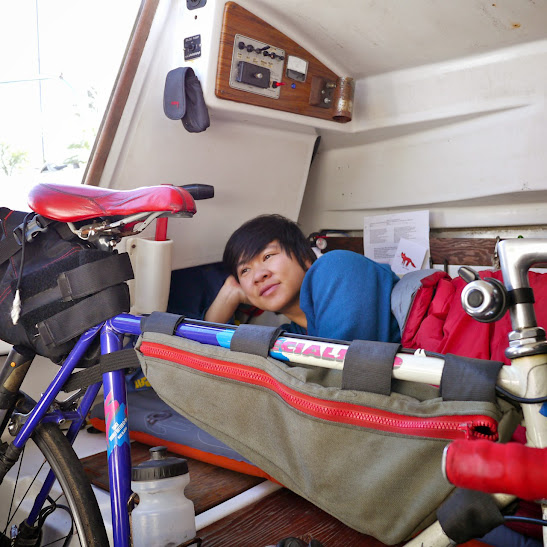 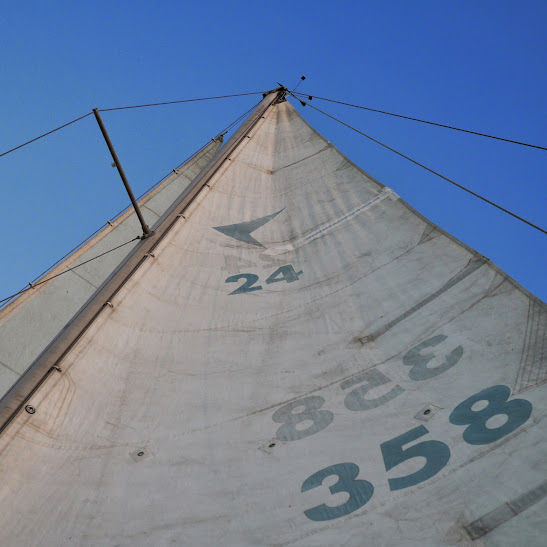 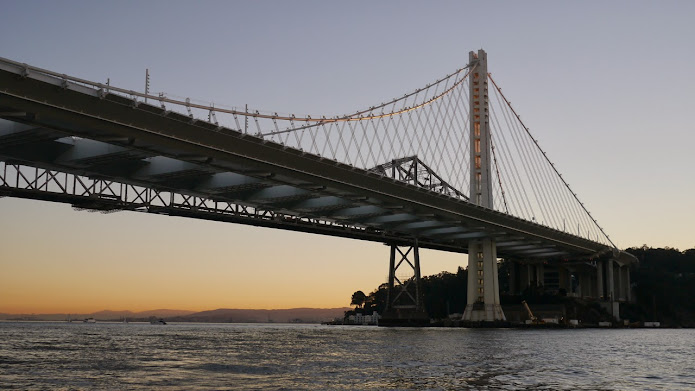 Just another way to get from the East Bay to San Francisco.

2 thoughts on “How To: Teach A Cyclist to Sail”