Continued from Part I.

Last spring, a friend rode from San Francisco to Bakersfield in less than a day. Chatting over chicken pot pies two days later, he said he was looking for his breaking point and mused, with a quiet sort of delight, that he didn’t hit it.

Infected by this madness, I’ve been dreaming of some audacious acts of my own. This New Year’s, I swept down the California coast to see what distances my mind and body could conspire to take me.

About 40 miles in, I tipped my helmet as I rode past Pie Ranch in Pescadero. The Pie Ranch work day and barn dance was the destination of my first ever solo bike camping trip just this summer. This was the southern boundary of my Shire, having never ridden further south on Hwy 1 by bicycle. With a shiver of anticipation, I crossed that invisible line and into my terra incognita — the coastline between San Francisco and Santa Barbara. 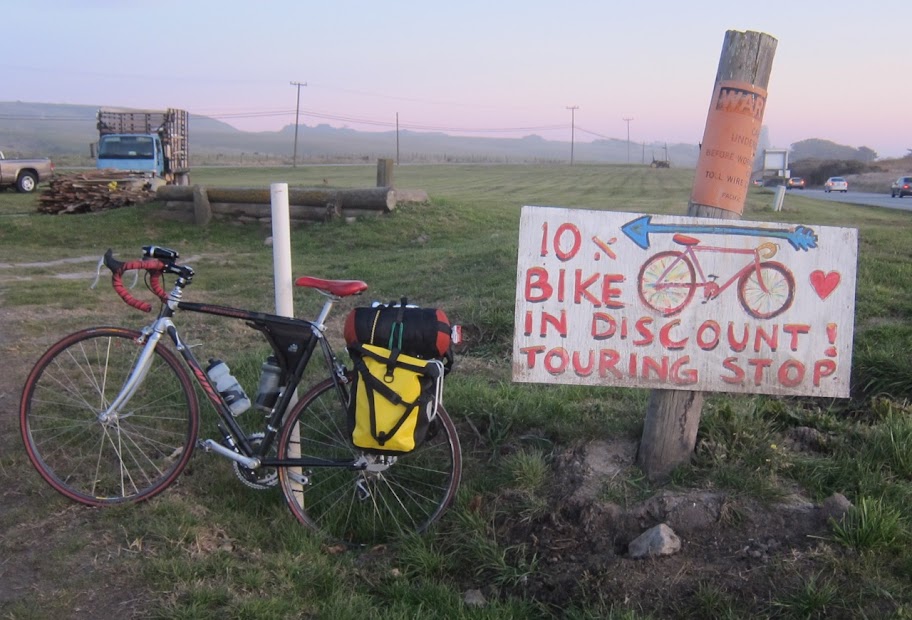 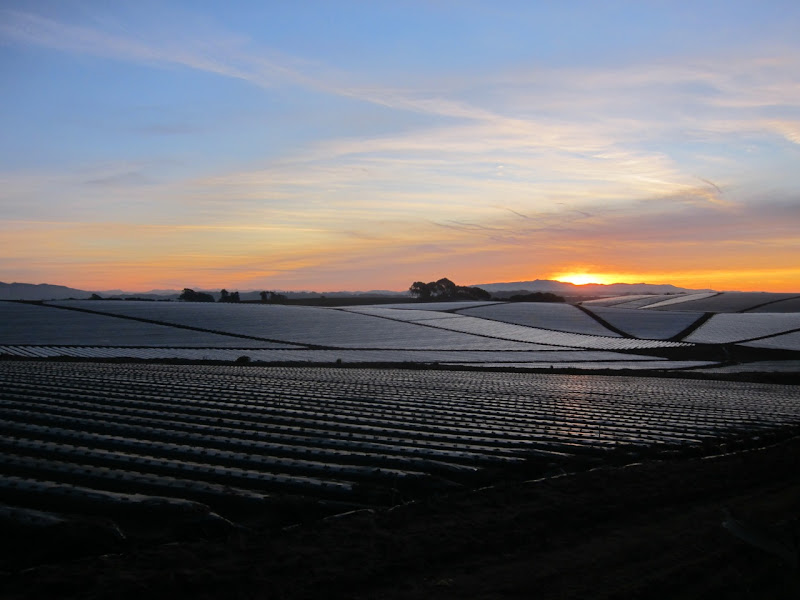 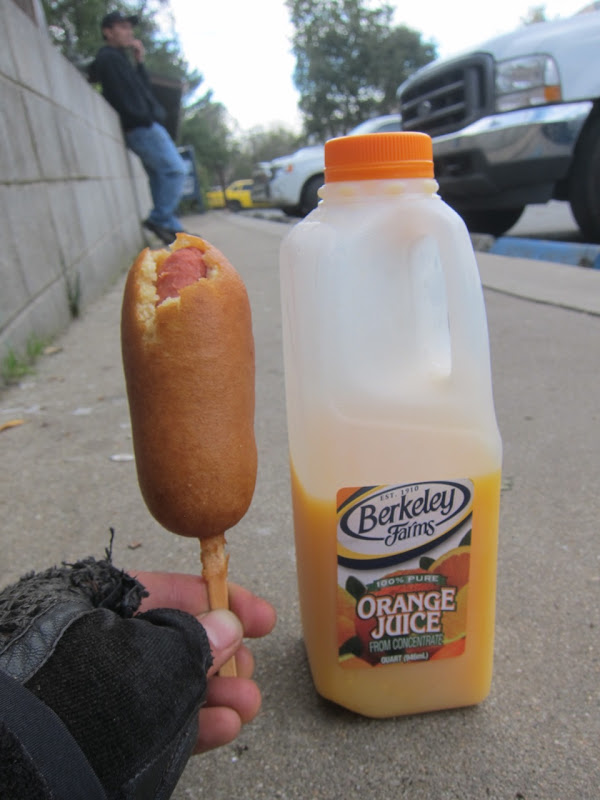 I woke up the second day in strawberry fields — or rather, shrink-wrapped rows stretching off to every horizon. After crossing the last of the flats in Salinas Valley, I began my climb into Big Sur. My metabolism kicked into high gear — lunch was half a pound of potato salad, a corn dog, a liter of orange juice and a ginger-molasses cookie the size of my outstretched palm.

All day, I passed pullouts and parking lots full of holiday rubberneckers and dreaded sunset. Sure enough at dark, the minivans and family sedans debarked en masse for home and hotel. Road addled, I carried on pedaling as vehicles menaced me from both directions. An hour after sunset, I was struck by inspiration. If I went to bed right then, I could start pedaling in the middle of the night with no traffic to speak of! Happy to rest my saddle sores, I laid out my bivvy sack behind a forest service fire station and set my clock for 3am.

I awoke in a fogbank. Even as I made preparations to go on, my mind was leaded by dread and fatigue. I zipped back into my sleeping bag, uneasy and full of doubt that I could continue. A hour later, I opened my eyes again. As I watched, the sky cleared and the stars winked on, one by one.  The Big Dipper pointed 200 miles north, from whence I had come. This constellation wheels around night after night, and yet remains steadfastly guided to the pole. I grinned at this augury. The Big Dipper pointed north and I was going south. At once, I knew I could go on. 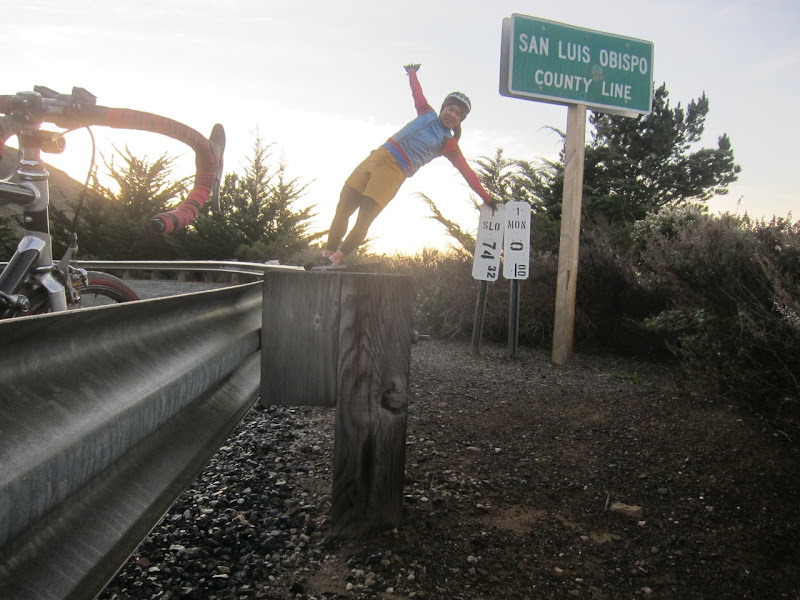 At sunrise, I crossed the county line. I had counted milemarkers since entering Big Sur. Hearst Castle was only 20 miles further!

Just outside of Morro Bay, I ran into another bike tourer, Mario, hauling ass on a handbuilt Davidson frame. He painted Boeing aircrafts in Seattle, and took advantage of the holiday furlough to ride from San Jose to Pismo. On this stretch of this ride, my tires started giving out. Light, thin and designed for racing, I massacred them by hauling my (moderately) loaded bike over gravel strewn highway shoulders. Mario and I rode side by side for a while, but my skinny tires were no match for such distracted driving. I hit a crack and pinch flatted, while narrowly avoiding collision with my riding partner. Despite these circus antics, Mario helped boot the rip in my front tire while I changed out the tubes.

I exchanged the shredded rear tire for a Gatorskin in San Luis Obispo, but caught more flats on the front as I peddled into Lompoc late in the night. I considered continuing on another 50 miles into Santa Barbara, but decided to catch a few hours of sleep. I had been on the bike 16 hours already, and wanted to reward myself by riding the hills between Lompoc and Goleta by dawnlight. 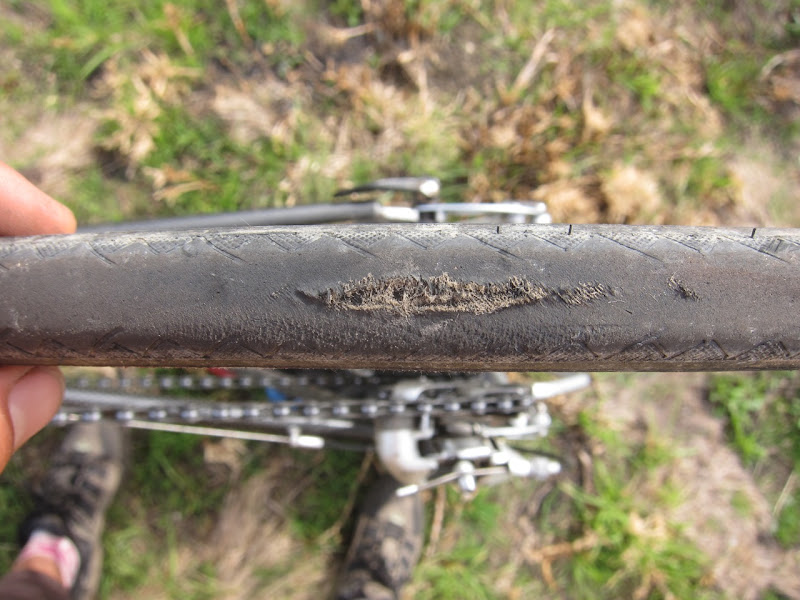 On the fourth day, I unzipped my bivvy sack to the sound of high tension power lines overhead. In a daze of fatigue, I didn’t realized I had thrown down behind a transformer station just outside of town. My body felt full of static — possibly the effect of EMF radiation?

With whatever rational impulse I had left, I resisted biking the rest of my 50 miles into Santa Barbara — in the middle of the night, with a bald front tire, on the side of a desolate mountain highway.  Instead, I limped my bike to a gas station. My attempt to look as stranded as possible succeeded. A pair of postal workers chatted me up — Joe, a wideset, closemouthed Latino and his tall, balding buddy James, with stringy long blonde hair and a bulldog’s careworn mug. They did a brief consultation with each other, and threw my bike into their SUV. As sunrise came over the ridges, we drove over the pass to Goleta.

After patching my flat, I rode into Santa Barbara in time for the 9:40am Amtrak train. Three hours later, I debarked at the Union Station in LA, and rode the light rail back to Arcadia to surprise my parents for New Year’s Eve. I was fast asleep by eleven that night and THAT was four hours past my bedtime.

Continue on to the Conclusion