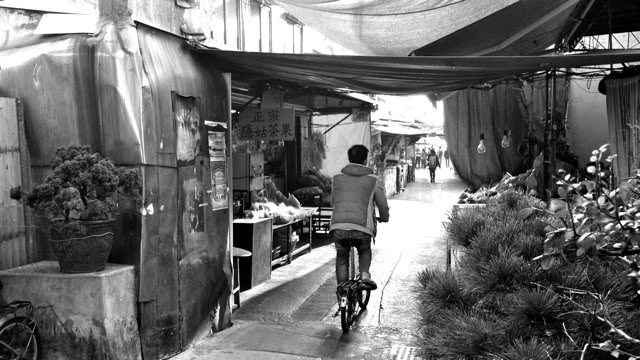 The narrow lanes of Tai O.

When Dad was just a lad in Hong Kong, you could only reach the fishing village of Tai O by water. Today, it’s a seamless, multimodal trip from Kowloon or Hong Kong Island. From my aunt’s place, we hopped on a green light bus and popped across town to the rail station (which was a bit of a mess due to high speed rail construction). The rail sped us across a double pair of huge suspension bridges to Tung Chung, the largest settlement on Lantau Island. From the rail station, it’s a quick walk to the Ngong Ping 360, a suspension gondola that takes you up to Lantau Peak. As we stood in line with Dad for tickets, my brother related that it only occasionally crashes but more frequently just gets stuck.

There was not much of a view from the gondola due to dense fog and factory pollution from Guangzhou. Still the sphincter clenching anticipation of mechanical failure gave a sense of adventure.Below us, the handhewn, stone block steps of the Lantau Trail snaked in and out of view. I wished I was hiking, to get a closer look at the subtropical forest covering the island.

The gondola takes you to the highest point of Lantau Island and off loads tourists into a government built “cultural village.” Despite the Disneyland style attraction of gift shops, dim sum cafes and even a Subway next door, something of the brave and lonely outpost remained at the hundred year old Po Lin Monastery. In the courtyard were pots of carefully cultivated garden shrubs and sweet smelling osmanthus flowers. Epiphytic ferns clung to the monastery’s glazed green roof tiles and hung from its lean, reaching trees. Village dogs snoozed outside, oblivious to the tourist throngs.

From the mountain top, it was a twenty minute bus ride to the village of Tai O. Set on Lantau Island at the mouth of the Pearl River Delta, the village’s charms include a small scale shrimp paste production and traditional chaguo — bite-sized dainties made of steamed glutinous rice flour. A motorboat tour takes you to see the villages’ stilt houses and Chinese White Dolphins that tarry year round on the inshore waters. I expected as much. All of this — shrimp, dainties, motorboat, dolphins — had been advertised in full-color banners at the gondola terminal.

To my surprise, there was one totally non-commodified piece of Tai O’s soul and that is the village’s unusual transportation culture. A waterway divided one side of town from the other. Besides motorboats, there was no other motorized traffic in Tai O. Once the bus dropped us off at the entrance to town, every place else could be reached by foot, bike, or cargo trike. It takes 20 minutes to walk to the mod-ish hotel on the point (a refurbished, colonial police station), though there’s a number for the water taxi if you’re truly lazy. 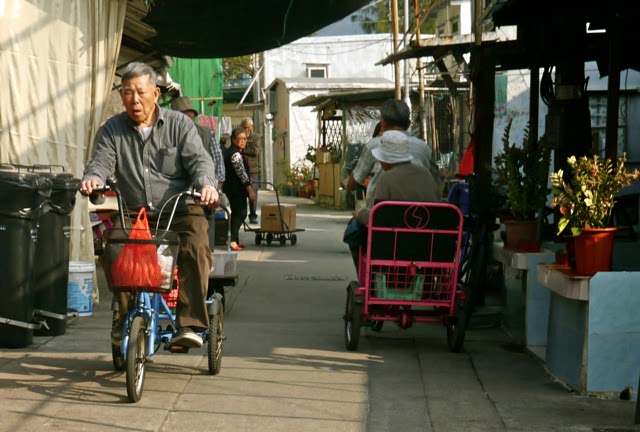 Afternoon traffic in the narrow lanes of Tai O.

While my brother napped beneath a banyan tree, Dad and I wandered through the narrow lanes of the town. It was full of tourists, despite it being a weekday before the Lunar New Year. Dad commented this didn’t even count as too many visitors, that it was truly jampacked on the weekends. As it was, I felt our intrusion on the small town. “Ring! Brring! BRRRIING!” Tourists walk three or four abreast and the locals insistently rang their bells while passing us on rusty folding bikes. Cantonese are a loud, rude people – self-acknowledged! – and always in a hurry. I was delighted to see us no different while on bikes, which dangled groceries, kids, a case of toilet paper, cut flowers for the New Year.

After a long mosey around town and a quick buzz of the white dolphins (I had no idea there were really dolphins, but there they were – some gray mottled, and others truly a pearly white pink), we sat down in the town plaza, chatting and people watching. A lobakbak (or ‘gramps’ in American) lounging on the bench heard us speculating about the temples by the plaza. He shouted, “I’m ninety years old and they built that temple when I was a kid!” My Dad — always the spirited tourist — moved to sit down by him. Dad asked if he was of the Dan minority, who lived on boats.

“No no!” The bakbak corrected him. “My grandfather, my father, we’ve been here three generations! Fishermen! Businessmen!”

Dad and gramps sat chatting for a while — each as friendly, stubborn, and deaf as the other. It was late afternoon now and the bike traffic picked up as townspeople returned from school and business. Toddlers pushed and pedaled around in plastic toy cars. A pack of kids rode by in school uniforms. Men on cargo trikes carried home with bags of fresh fish and shrimp — dinner purchased from the street market in town.

The bakbak pointed to a restaurant at the other end of the plaza, where he goes to yumcha — drink tea and eat dim sum — every morning.

“After yumcha I sit over there. In the afternoon, I move to the shade over here. I’m ninety years old! You come back again and you can always find me here.”

I hope you do. 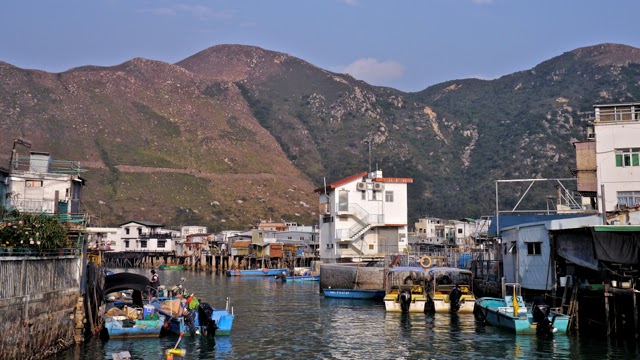 The main road in town. By the main bridge, a woman hawked shrimps that were literally leaping from her boat. 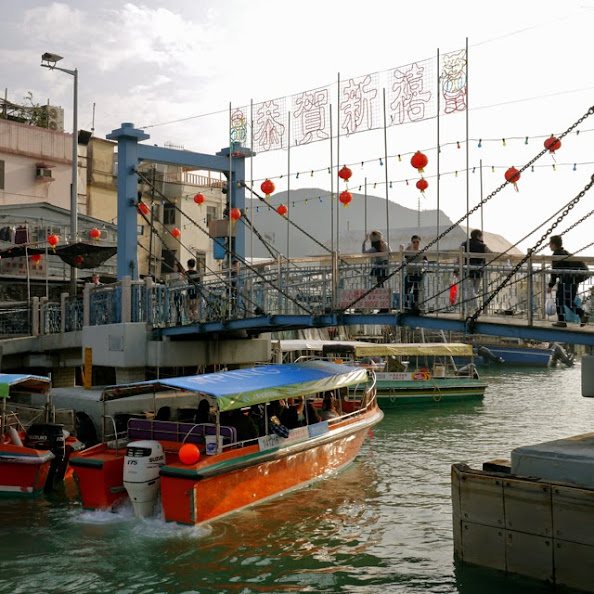 Dad says when he was little and before the bridge was built, there was a rope ferry you pulled yourself to get from one side of town to the other. The red motorboat excursion costs only 20 HKD and takes you to swamp the stilthouses and buzz the white dolphins. 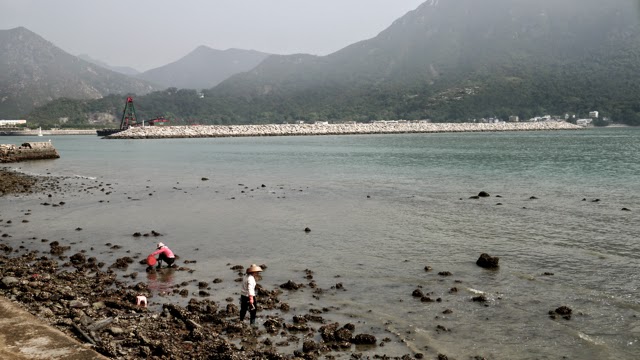 Women dig for clams even as the tides come in at Tai O harbor. 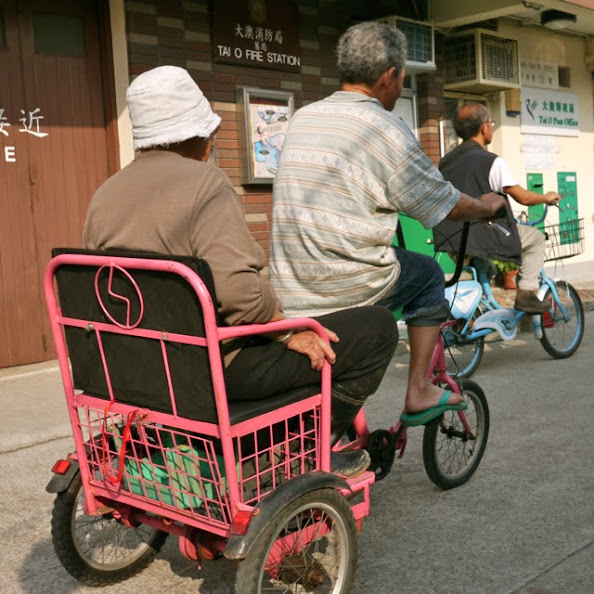 Returning from clam digging, this popo gets a lift in one of the town’s ubiquitous cargo trikes, with clams and green digging stool stashed underneath her seat. 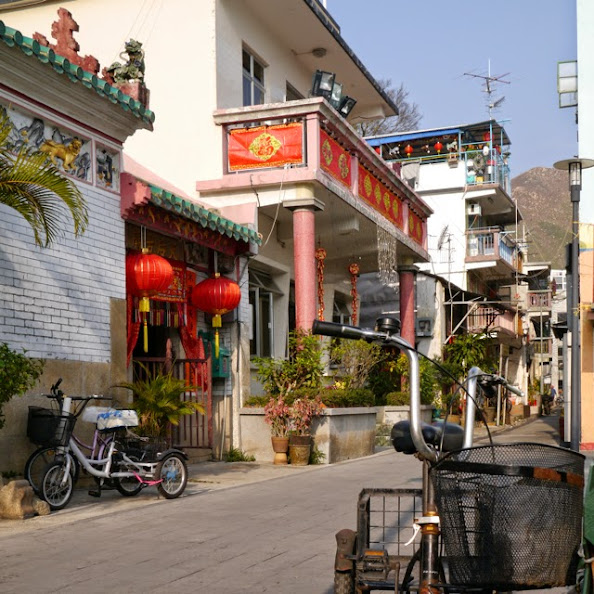 Lots of bike parking in front of the town’s many temples. The little one hung with red lanterns is dedicated to Tian Hou, the fisherman’s deity. 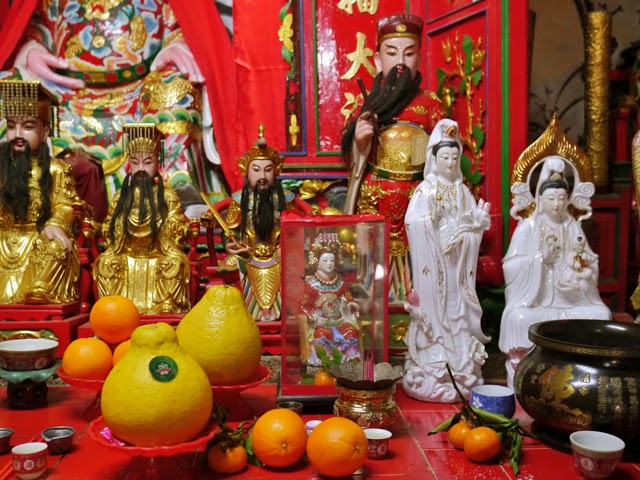 Deities abound in Tai O’s many temples. Tian Hou (the protector goddess of fisherman) sits here in a glass box in front of a larger altar, and also has her own temple in the main village. 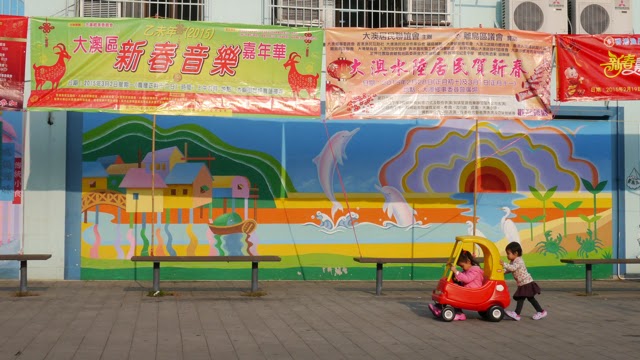 I took a nice long sit in the town plaza and watched the afternoon traffic. These kids flintstoned around and around the plaza. 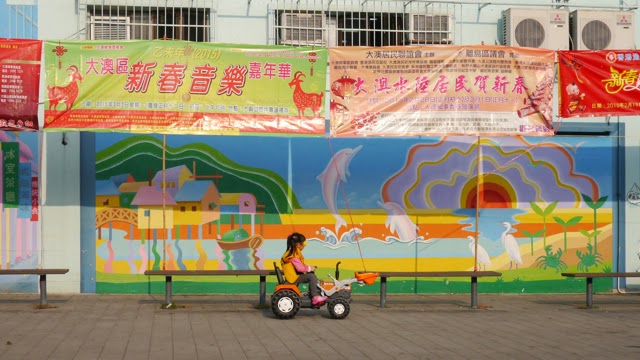 Not to be outdone, this kid comes by on a pedal powered bulldozer. 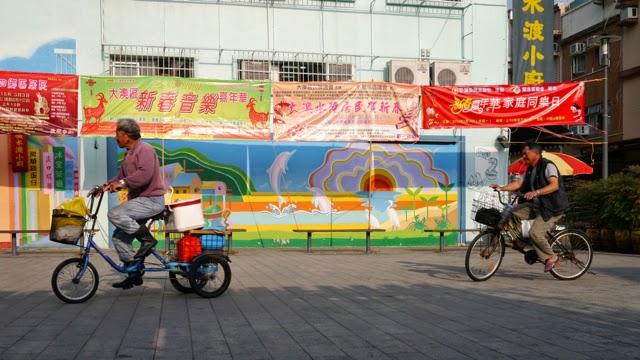 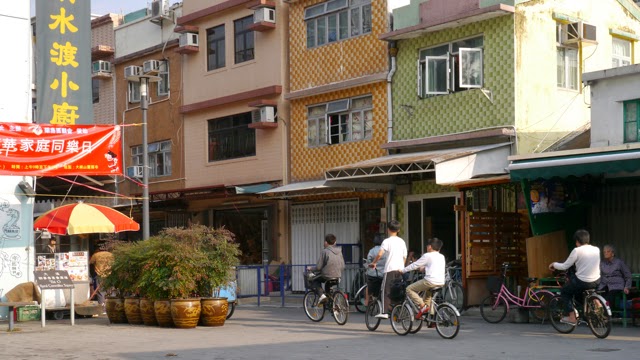 From Hong Kong or Kowloon, take the MTR Tung Chung line to the final stop.

Return by bus to Tung Chung MTR station or ferry to Mui Wo. And keep an eye out for all these great pieces of walking and biking infrastructure on Lantau Island. 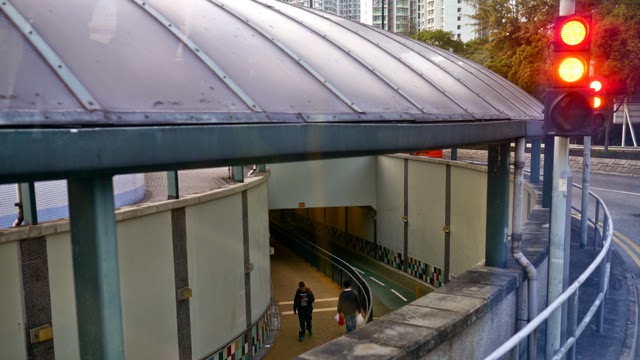 On the bus ride back to Tung Chung, I spotted this two way, separated cycle and pedestrian lane that followed the road in from the outskirts of town. Here, it dives below a four lane street to terminate at the subway station and the big malls and high rise apartments nearby.

Ginger is a human-powered adventurer based in Oakland, California.
View all posts by Ginger Jui »
« Hot Springs and Gravel Roads: Panoche Hills Weekend
Always Talk to Strangers: The Boxer »